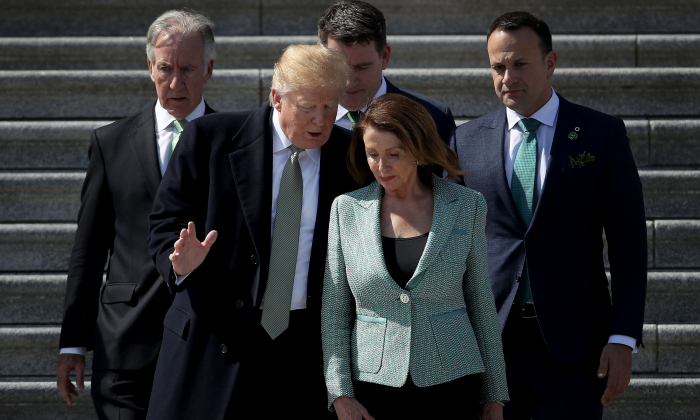 Democratic and Republican negotiators agreed on a nearly $1.4 trillion spending plan on July 22. The new budget deal permanently ends budget caps set to expire in 2021 and suspends the debt limit for the next two years.

President Donald Trump on July 23 welcomed the deal on Twitter, calling it “a real compromise in order to give another big victory to our Great Military and Vets!”

He also said there were no poison pills in the deal, meaning that there would be no restrictions on the administration’s ability to transfer money to the border wall.

The White House and congressional leaders have been racing against the clock for weeks to reach an agreement before the August recess.

Treasury Secretary Steven Mnuchin had warned that the U.S. government could reach its debt ceiling in early September and urged Congress to take action before the August recess of Congress.

Under the new deal, the military budget would be $738 billion for the fiscal year 2020, a 3 percent increase from current-year levels. This will be followed by a further $2.5 billion increase in 2021. Trump’s request for defense budget was $750 billion.

The new deal ends the budget caps known as sequestration under the 2011 budget law. And that is a big relief for the military, according to Peter Huessy, director of Strategic Deterrent Studies at the Mitchell Institute for Aerospace Studies.

“That’s a huge victory for the security of the country because you won’t have to have this hammer over our heads,” he said.

According to Huessy, the bipartisan support to increase defense spending has grown over the years with the rise of China’s threat, in particular.

“They’re beginning to understand how serious are the challenges on China.”

Huessy added that the government should focus on modernizing nuclear forces, developing space and missile defense capabilities, and rebuilding the Navy and Air Force in order to tackle Beijing.

House conservatives voiced their objections to the budget plan that increases spending by $2 trillion over the next decade.

“With more than $22 trillion in debt, we simply cannot afford deals like this one,” Rep. Mike Johnson (R-La.), chairman of the Republican Study Committee, a caucus of conservative members of the Republican Party, said in a statement.

“Jim Jordan and I have serious reservations about the budget agreement and will not be supporting it,”  Meadows told Politico, adding that the House Freedom Caucus would meet to discuss the budget and decide on whether to take an official position against the deal.

According to Rep. Chip Roy (R-Texas), more than 40 House Republicans signed a letter to Speaker of the House Nancy Pelosi (D-Calif.) asking for “fiscal sanity” and adherence to the budget caps put in place by the 2011 Budget Control Act.

The new deal raises spending by $320 billion over existing caps for the next two years.

“I will vote no on this so-called ‘deal.’” Roy stated on Twitter. “The GOP is now, in the name of ‘defense spending,’ mortgaging our future national and economic security. But worse, unlimited bipartisan government spending risks losing our character and sense of self-reliance as a nation.”

The House is expected to vote on the budget deal this week, before lawmakers leave town on July 26 for August recess. Senate lawmakers will leave for the recess a week later.

“I love the concern of the conservatives who are bringing attention to the problems that we have with fiscal responsibility in this town,” Russ Vought, acting Office of Management and Budget director told Fox News. “This president put forward more spending cuts than any president in history, and we have been negotiating for five months.”

He accused Pelosi of holding the debt ceiling hostage to a two-year budget deal.

Vought said, however, the new deal had “no new legislative riders to stop this president’s agenda on deregulatory initiatives or building the wall.”

The new deal was also a win for Trump’s pro-life policies, as Democrats wouldn’t be able to use poison pills to roll back pro-life protections, he said.