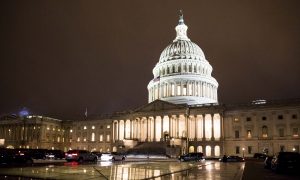 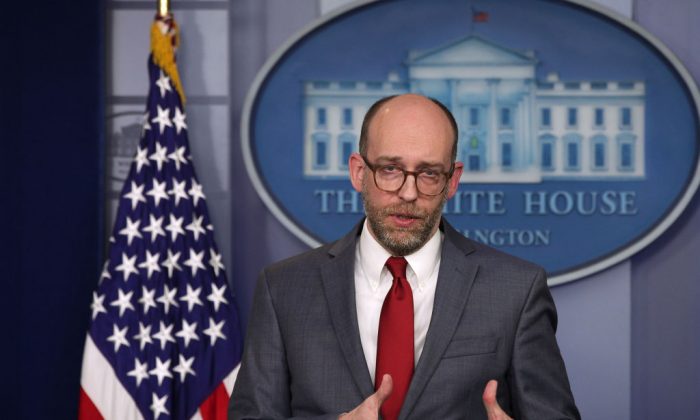 Acting Director of Office of Management and Budget Russell Vought speaks during a news briefing at the James Brady Press Briefing Room of the White House in Washington on March 11, 2019. (Alex Wong/Getty Images)
US News

WASHINGTON—The White House’s top budget official defended the president’s new budget proposal on March 12, saying that “the problem is not that American tax is too little; it is that Washington spends too much.”

The proposal aims to cut the budget deficit by about $2.7 trillion over 10 years and balance the budget in 15 years. According to the White House, about $1.9 trillion of the savings will be to mandatory spending that is on autopilot outside of the discretionary spending. And about $517 billion in savings will come from Medicare.

Russ Vought, acting director of the Office of Management and Budget, said the budget helps achieve savings through lowering drug prices, rather than cutting Medicare benefits to seniors.

“These are programs that will continue to increase every year. So these are not cuts, these are savings over the life of the 10-year window,” he said at the House Budget Committee hearing on March 12.

“Many of the numbers that you’ve seen out in the press in the last 24 hours are inaccurate.”

According to Vought, other major goals of the administration are to achieve more than $200 billion in savings through streamlining and improving student loan repayment and more than $300 billion through welfare reform.

Trump’s spending cuts will most likely get rejected in the Democratic-controlled House or even in the Senate, where Republicans would need votes of Democrats to pass a new budget deal.

“It is obviously a tough sell because of a divided government and a clash over the priorities of our nation,” House Budget Committee ranking member Steve Womack (R-Ark.) told The Epoch Times, adding that the Republicans have done their job well in articulating the fiscal condition of the country.

As part of the spending-cut initiative, the administration also has identified a number of wasteful and ineffective programs, such as Job Corps. Maya MacGuineas, president of the Committee for a Responsible Federal Budget, applauded the administration’s efforts to tackle these inefficient programs.

“If we can squeeze out waste and inefficiency in the government that would be great, as this is taxpayers’ money and we want to use it well,” she said. “But keep in mind that one man’s waste is another person payout. So it usually tends to be much more difficult than it sounds like it should be.”

According to Democrats, the president’s budget is dead on arrival.

“These cuts in the Trump budget aren’t a tightening of the belt or a trimming of the fat, or even a serious attempt at reining in spending,” House Budget Committee Chairman John Yarmuth (D-Ky.) said during the hearing.

The president’s budget asks for $750 billion for overall defense spending, an increase of 5 percent from the 2019 level. About $718 billion of that would go to the Defense Department. The budget also includes $8.6 billion for the completion of a wall to secure the southern border.

House Speaker Nancy Pelosi (D-Calif.) and Senate Minority Leader Charles Schumer (D-N.Y.) made it clear that they would not approve the wall money.

“I think the Democrats’ arguing against border security is a losing argument for them,” Rep. Dan Crenshaw (R-Texas) told The Epoch Times.

“There’s going to be a lot of things that even Republicans disagree with within the budget,” he said. “But I do appreciate the president’s signaling that he wants to actually balance the budget.”

According to critics, the White House’s budget proposal sets high expectations for economic growth. The budget forecasts the economy will grow about 3 percent annually over the next decade, relying on the assumption that the deregulation and tax cuts will have a long-lasting impact on the economy.

“Over the next 10 years, we are confident that the economic policies of this administration … will more than pay for the costs of the tax cuts,” said Vought.

He noted that a high growth rate would be achieved if the administration’s policy proposals become law, which are not taken into account in the forecasts of the Congressional Budget Office (CBO).

According to the CBO, the growth in the economy will be 2.3 percent this year, down from 3.1 percent in 2018, as the effects of the new tax code on the growth of business investment wane. And after 2019, growth is projected to slow further to an average of 1.7 percent through 2023.

According to Rep. Chip Roy (R-Texas), the growth rates in the administration’s budget are reasonable.

“If we can reduce the regulatory state and get health care costs down, we can get the economic engine going, and then restrain spending. That will be fine,” he told The Epoch Times.

“If we’re going to continue to spend recklessly while having policies that restrain growth, there’s no chance to get out of the fiscal malaise we find ourselves.”