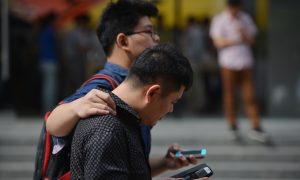 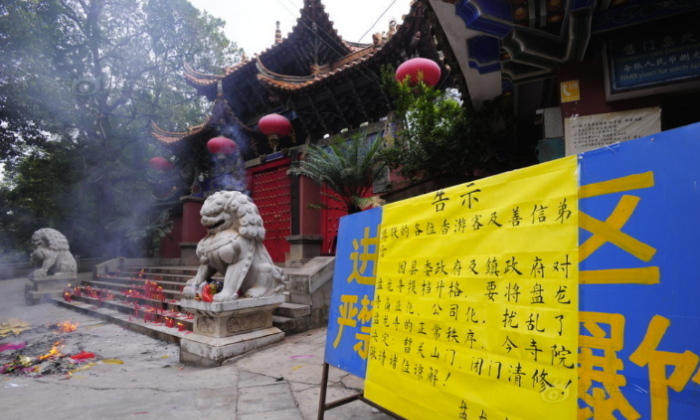 The gate of the Buddhist Panlong Temple in Yunnan Province was closed by monks on Aug. 15, who put up a sign protesting the local government’s attempt to commercialize their monastery. (Screenshot/sina.com.cn)
China

Tourism officials in the southern Chinese province of Yunnan had a lucrative idea for the famous Panlong Buddhist Temple recently, attempting to turn it into a commercial tourist attraction.

But the monks that resided there had different ideas. On the morning of Aug. 15, the gates to the temple had been firmly shut, and a board placed next to the door which read: “Due to the fact that the Jinning County government and the Jincheng Township government wish to commercialize and corporatize the Panlong Temple, disrupting the temple’s order, the temple has decided today to temporarily shut the gates for a quiet meditation environment. Please understand and forgive us.”

A monk at the Panlong Temple, Ren Qing, said that it was the first time the temple has taken such a measure, according to the Chuncheng Evening News, a newspaper in Yunnan Province. Many tourists who showed up to tour the grounds instead burned incense outside.

The Panlong Temple sits on the mountain by the same name, and is less than 2 miles from Jincheng Township, the major city in Jinning County. Established in 1347, the Panlong Temple is one of the three major Buddhist destinations in Yunnan Province, and attracts masses of tourists from home and abroad.

Closing Panlong Temple followed a local government meeting on Aug. 14 about upgrading the Wanghai (“sea watching”) Pavilion that is part of the temple complex, reports said. Local officials proposed establishing a museum and a multimedia room inside the pavilion, which offers expansive and stunning views overlooking the township and a lake.

The abbot and the monks of the monastery weren’t very keen on the proposal. “We monks can’t live a life of commercialization,” the abbot told local media.

Speculation also went around that the local government intended to raise the ticket prices. After the closure, officials promised not to proceed with their plans for now, and sought to visit the abbot to negotiate a reopening.

A similar protest took place in February in Yunnan’s Chicken Foot Mountain, another famous Buddhist site. Over 100 temples on the mountain shut their doors in protest against the local government’s attempt to force all tourists to use their bus company, at the charge of 60 yuan ($10) a ticket.

The attempt to make money off Buddhism contrasts deeply with the way religion has been treated in earlier eras of Party history. After the communists came to power, and in particular during the Cultural Revolution, temples and traditional religions were denigrated and smashed. During the last few decades much repair work has been done and a tourist industry around the temples has developed. The regime, however, continues to enforce control over religion, or when it cannot gain control, instead resorts to persecution. The Falun Gong spiritual practice is persecuted, and Tibetan Buddhists and Uyghur Muslims also face persecution.

Xia Xiaoqiang, an independent commentator on the Communist Party based in the United States, said that monasteries in China have essentially become economic units for local Party officials, throwing off income while preserving an illusion of religious freedom.

“Under such fake religious freedom in China, the shutting of the gate at Panlong Temple is a protest against the Party’s control. Phenomena like this have been rare in the past.”

Additional reporting by Luo Ya