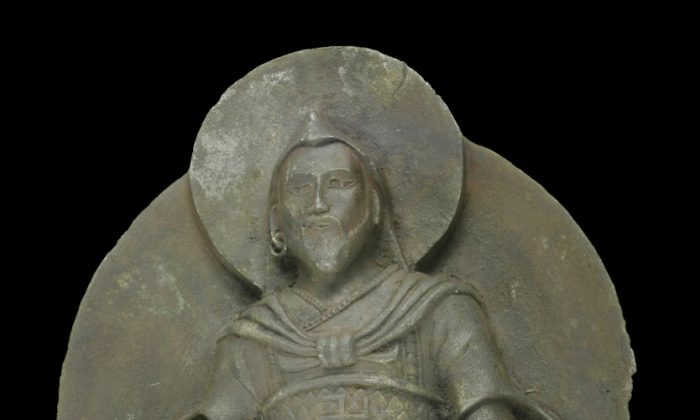 A 1,000-year-old Buddha statue from Tibet was carved from a rare meteorite that landed on Earth about 15 millennia ago, according to new international research.

Known as the “Iron Man,” the statue weighs 10.6 kilos (about 23 pounds) and is composed of ataxite, a class of iron meteorites with high nickel content.

“The statue was chiseled from a fragment of the Chinga meteorite which crashed into the border areas between Mongolia and Siberia about 15,000 years ago,” said research leader Elmar Buchner at the University of Stuttgart in a press release.

“While the first debris was officially discovered in 1913 by gold prospectors, we believe that this individual meteorite fragment was collected many centuries before.”

The artifact was brought to Germany after a 1938 Nazi expedition led by zoologist Ernst Schäfer, sponsored by Nazi SS Chief Heinrich Himmler. The whole team may have been SS members, and historians believe they were in Tibet seeking the origins of the Aryans, embraced by Nazi ideology as the original and supreme race.

Thought to represent the Buddhist god Vaisravana, the Buddhist King of the North or Jambhala, the statue may have originated from the pre-Buddhist Bon culture of the 11th century.

On its chest is a large “srivatsa,” symbolizing the god’s Buddha status. The Nazi swastika bears some similarities to the srivatsa and this may have led the expedition to take it back to Germany.

It then became part of a private collection in Munich until it was auctioned in 2007, when it became available for scientific research.

“The Iron Man statue is the only known illustration of a human figure to be carved into a meteorite, which means we have nothing to compare it to when assessing value,” Buchner said.

“Its origins alone may value it at US$20,000; however, if our estimation of its age is correct and it is nearly a thousand years old it could be invaluable.”

In their paper, the researchers note the significance of meteorites to prehistoric human cultures. “The fall of meteorites has been interpreted as divine messages by multitudinous cultures since prehistoric times, and meteorites are still adored as heavenly bodies,” they wrote.

“… Iron meteorites are basically an inappropriate material for producing sculptures,” the researchers concluded.

“The challenging use of the ‘iron man’ meteorite as well as the (at least) partial gilding of the statue implies that the artist was certainly aware of the outstanding (extraterrestrial) nature of the object carved.”

The findings were published in the Meteoritics and Planetary Science on Sept. 14.