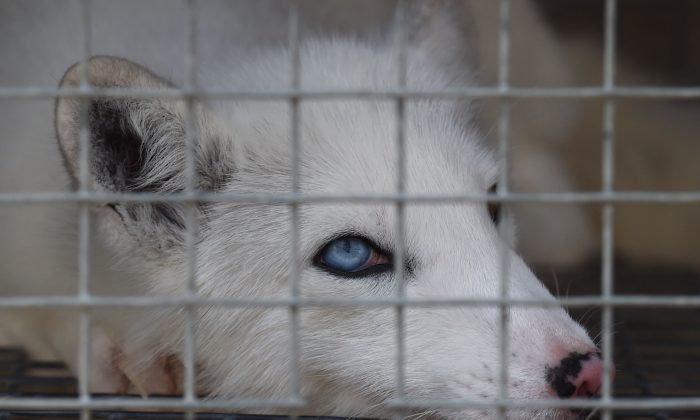 This photo taken on July 21, 2015 shows a fox inside a cage at a farm which breeds animals for fur in Zhangjiakou, in China's Hebei province. (Greg Baker/AFP/Getty Images)
China

Wang Yunfang, a peasant woman living near Beijing, was resting at home on March 30 when she heard disturbed cackling from her chicken coop. Rushing out to see what was the matter, she found two foxes tearing at the frantic birds. Three of Wang’s chickens perished and 10 more were frightened away from her coop of 50.

The vulpine pests hadn’t come from the wild. According to the Beijing Evening News, they were two of the over 400 released into the environment by friends of a wealthy resident, as part of a Buddhist ritual.

“Fangsheng,” the act of buying and releasing animals otherwise destined for slaughter, is a traditional practice inspired by Chinese Buddhism. It is believed that by exhibiting mercy to these doomed beings, one can accrue virtue and gain blessings and fortune.

But often the animals are farm-raised and unable to cope in the wild; in other cases, they become invasive pests. The growing popularity of fangsheng with monied Chinese, bereft of other outlets for spiritual expression, has turned into a budding commercial enterprise—and a gnawing ecological problem.

Because of large numbers of farmed and alien fish being dumped into the scenic Daming Lake in Shandong Province, the waters are often polluted with algae and the stench of dead marine life, according to local news services.

Many fish released are either sickly or injured, and die soon after being set free. Carp, catfish, turtles, and frogs released at Daming Lake have taken to eating the area’s picturesque lotus flowers while driving out the native prawns and water rats.

More irritatingly, in 2014 there was a population explosion of river snails when some local residents decided to let the pests into Daming. They reproduced in such numbers that drainage pipes around the lake were clogged by their mass.

The same dilemma has cropped up in other parts of the country. In May 2015, over a thousand red-eared sliders, recognized as one of the worst invasive species of turtle, were released into a park lake in Fuzhou, Fujian Province.

Because of the number of people involved in fangsheng, commercial interests have taken root and turned the religious deed into a moneymaking scheme. Foxes can fetch between 500 and 800 yuan (roughly $80 to $120) per animal at a farm in Beijing, as reported by Beijing News.

Because animals like foxes and martens are raised to be skinned, often while still alive, for their fur, they are considered especially meritorious candidates for fangsheng.

“My foxes are of excellent quality, so I have many long-term customers,” a farmer surnamed Chen told Beijing News. For instance, a customer from Sichuan Province organized some acquaintances to take part in fangsheng and ordered over 1,000 foxes from Chen’s farm.

Beijing News also reported that one fangsheng organization mobilized 500 people to release sparrows, pheasants, and snakes in the area of Changping, Beijing. The participants paid a fee of 530 yuan ($82) each, though the total cost of the event was only around 20,000 yuan (about $3,000).

“The pheasants had lost most of their feathers and were unfit to live in the wild,” said Kong Lingshui, head of Beijing’s Garden and Forestry Bureau, in an interview with Beijing News.

Sometimes the act of fangsheng is immediately futile. In December 2013, 20 residents in Shandong Province brought over 2,000 pounds of carp to release into a tributary of the Yellow River.

In China, Not Even Ronald McDonald is Safe From the Police
TOP NEWS