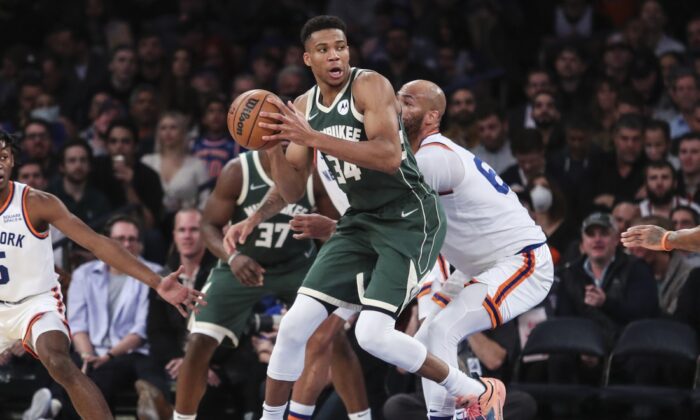 Pat Connaughton hit a career-high seven 3-pointers Wednesday night, including three in a span of 95 seconds late in the fourth quarter to fuel a game-ending run as the visiting Milwaukee Bucks held off a furious comeback by the New York Knicks to earn a 112–100 win.

The Bucks, who squandered a 21-point lead in a 113–98 loss to the Knicks on Friday, led by 24 points in the third quarter Wednesday before New York rallied. Fueled almost entirely by reserves, the Knicks mounted a 40–16 run to tie the game at 89–89 on a 3-pointer by Immanuel Quickley with 5:06 left in the fourth quarter.

George Hill answered with a 3-pointer to give the Bucks the lead for good. The Knicks twice pulled within a point before Milwaukee, hanging on to a 98–94 lead, grabbed momentum after coach Mike Budenholzer challenged a foul call on Giannis Antetokounmpo with 2:53 left.

Upon review, the foul was changed to a block of a layup attempt by Obi Toppin. Antetokounmpo won the subsequent jump ball, and Connaughton drained a 3-pointer to begin the Bucks’ decisive surge.

Connaughton finished with a game-high 23 points, one shy of his career-high set for the Portland Trail Blazers against the Phoenix Suns on Oct. 18, 2017. The seven 3-pointers exceeded his previous best of six treys, established against the Indiana Pacers on March 22.

Antetokounmpo had 15 points, 15 rebounds and eight assists for the Bucks, who have won two straight. Jrue Holiday finished with 18 points while Bobby Portis (17 points) and Grayson Allen (15 points) also got into double digits.

Derrick Rose scored 22 points to lead the bench brigade for the Knicks, who played the final 14-plus minutes with Rose, Quickley, Taj Gibson, Alec Burks and Obi Toppin on the floor. Quickley had 18 points while Burks and Toppin finished with 14 points apiece. Julius Randle (16 points) was the only New York starter to reach double figures.