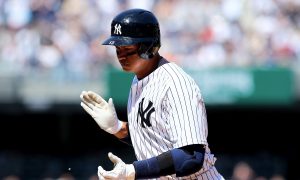 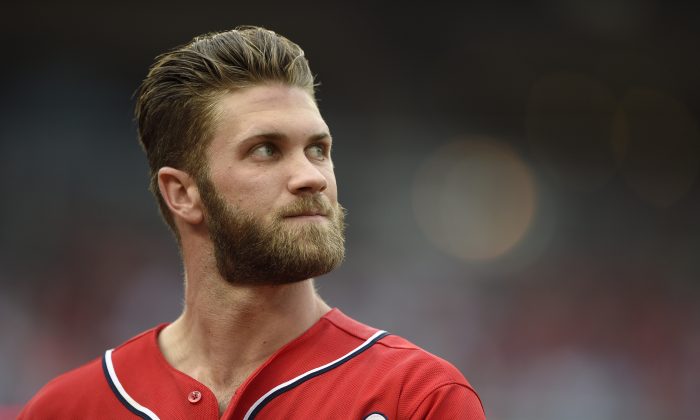 Washington Nationals' Bryce Harper is second in the majors with 20 home runs, while his .713 slugging is better than anyone's. (AP Photo/Nick Wass)
Baseball

Washington Nationals star outfielder Bryce Harper isn’t scheduled to become a free agent until after the 2018 season, but that doesn’t mean Yankee fans can’t dream about his possible arrival now.

During the Nationals–Yankees two-game set last week, chants of “20-19!” and “Fut-ure Yank-ee!” were heard from the bleachers section during his at-bats. Harper collected three hits—including his 20th home run—in eight trips to the plate for his first appearance in the Bronx.

The chants weren’t just empty dreams though. There’s a very real chance that the ultra-talented star—who wears No. 34 because the two numbers add up to his hero Mickey Mantle’s old number 7—could end up with the much-storied franchise.

The 22-year-old former first overall pick of the 2010 MLB draft, who first landed on the cover of Sports Illustrated the year before as a much-hyped 16-year-old from Las Vegas, had expressed his career goals, stating his New York dreams, in that same article six years ago. “Be in the Hall of Fame, definitely. Play in Yankee Stadium. Play in the pinstripes. Be considered the greatest baseball player who ever lived. I can’t wait,” he told SI’s Tom Verducci.

To his credit, Harper has not openly campaigned to be a Yankee since the Nationals drafted him in 2010 and rushed him onto their big-league roster in 2012—as a 19-year-old.

“I love the Nationals,” Harper said when asked about a future career with the Yankees, according to the Washington Post. “I enjoy the fans that support me in right field every single day. I love running out there and seeing them out there.”

Of course, true love would mean signing a long-term deal in D.C. before the free agency bidding starts—something he hasn’t done. Likely, it’s in part because he is represented by super-agent Scott Boras, who generally prefers his clients to enter the open market before signing, in order to get the biggest deal possible.

It usually works, too.

In 2001, a then 25-year-old Alex Rodriguez—another Boras client and former much-hyped first overall pick—entered free agency and came out with one of the craziest deals ever. The multitalented shortstop signed a 10-year, $252 million deal from the Texas Rangers, that actually doubled the second-biggest contract and was more than owner Rangers Tom Hicks had even paid for the team.

After three years the Rangers couldn’t afford A-Rod’s deal and eventually traded him to the Yankees—where he won a pair of MVPs, a World Series title, and helped the team to six division titles.

Of course the Yankees went overboard when they re-signed him to an even crazier deal (10-year, $275 million) after the 2007 season. Yet it’s a mistake the big-spending team has been able to afford.

Washington, which is a similar market size to Texas—both lag well behind New York—could learn a lot from the Rangers mistake, which would be the Yankees gain. Again.