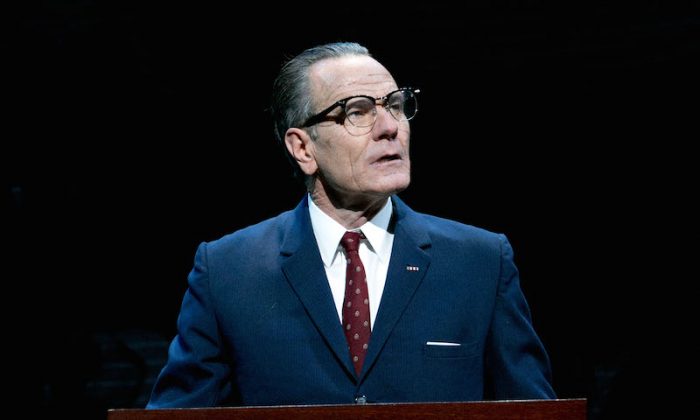 This image released by Jeffrey Richards Associates shows Bryan Cranston portraying President Lyndon B. Johnson during a performance of "All the Way." Cranston plays Johnson during his first year in office following the assassination of John F. Kennedy and explores both his fight for re-election and the passage of the Civil Rights Act of 1964. (AP Photo/Jeffrey Richards Associates, Evgenia Eliseeva)
Entertainment

Bryan Cranston’s wife, actress Robin Dearden, will be happy when her busy husband wraps up his role in “All the Way,” a play about the early years of Lyndon B. Johnson’s presidency, at the Neil Simon Theatre.

Cranston said that after he’s done the play on June 29, he will return to California to spend time with Dearden and their 21-year-old daughter, Tyler Cranston. The actor also wants to “lay in a hammock,” according to Variety.

But there won’t be a lot of rest time for the “Breaking Bad” actor as in the recent interview with CNN he gave fans a glimmer of hope that there will be a Season 6 for Walter White.

“You never saw a bag zip up or anything,” he said in the interview.

Cranston was most recently spotted with his wife taking a walk in New York’s Central Park during the Memorial Day holiday.

The only confirmed continuation of the “Breaking Bad” series is the spinoff comedy “Better Call Saul” which will start filming in June of this year and is scheduled to get released later in 2014.