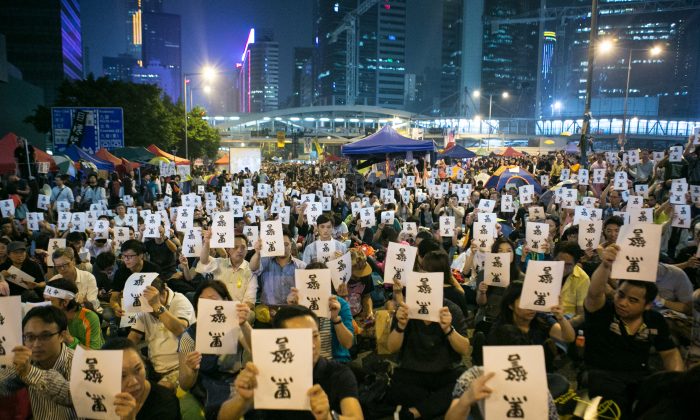 Thousands of pro-democracy protesters hold signs upside down that say in Chinese “Black Police,” referring to the incident in which police beat and kicked protesters as they removed them from Long Wo Road, on Oct. 15. (Benjamin Chasteen/Epoch Times)
China

Brutality and Determination in Hong Kong

After over two weeks of student protests for democracy that have clogged some of Hong Kong’s busiest thoroughfares, the city’s chief executive has found a way to counter the protesters. The next few days will test whether the students can rally themselves, and the city they are defending, while the Hong Kong government seeks to beguile them with a new offer of talks.

The protests were originally triggered by Beijing’s decision on Aug. 31 that the nominees for the next chief executive election in 2017 would be chosen by a committee of elites who favor the Chinese regime. The Hong Kong people would then be allowed to vote from among these carefully vetted candidates.

The protesters are demanding that all Hongkongers have the right to nominate and vote for their chief executive.

The students sought to force the Hong Kong government to the negotiating table by occupying key areas in the city and blocking busy roads. In effect, the students held the commercial life of the city hostage. The strategy appeared for a time to bear fruit.

Half an hour before a midnight deadline issued by the students in an open letter, Hong Kong Chief Executive Leung Chun-ying said at a press conference on Oct. 2 that there would be negotiations.

After talks planning the talks, negotiations were set to begin on Friday, Oct. 10. Then, on Thursday, Oct. 9, Carrie Lam, the No. 2 official in Hong Kong, canceled the talks and blamed the students for their failure.

The government may have canceled the talks in part because it looked like the students’ movement was losing steam. While the previous weekend had seen tens of thousands of students in the streets, during the week the number dwindled to at most a few thousand.

With negotiations dismissed, Leung had either to accept the students’ occupation or find a way to dislodge them. Two previous attempts to force the students out had failed.

On the night of Sept. 27, extending into Sept. 28, the police had used barrages of tear gas and pepper spray to disperse the students. The move was met with international condemnation and by more students and other protesters returning to cram into the occupied areas.

On Oct. 2, hundreds of individuals showed up to oppose the pro-democracy protesters. The protesters said these were triads—gangsters. They harassed, shoved, and cursed the students and tried to intimidate them.

As with the use of tear gas the week before, the violence did not succeed, as more people came out to join the pro-democracy protests.

Early on the morning of Oct. 12, a hundred or so policemen showed up at Admiralty and removed several metal barricades the students had commandeered to block the road.

Over the next two days, police would suddenly appear in force at different places in the city, chipping away at the areas the students occupied. There were decisive encounters on the two roadways that connect Hong Kong Island with the rest of Hong Kong.

On the afternoon of Oct. 13, dozens of unidentified men appeared and snipped the plastic ties holding the barricades erected by the students blocking Queensway Causeway, a 10-lane highway that runs through the central business district. Half an hour later, a truck arrived and police loaded the freed barricades on it and drove off.

In response, the students feverishly built much more formidable barricades, using bamboo poles, trash containers, tape, chains, and concrete. On the morning of Oct. 14, police arrived in force and used chain saws and bolt cutters to dismantle what the students had built. Dump trucks hauled the remnants away.

That night students then more or less spontaneously converged on and drove off the police who were guarding Lu Wong Road and tunnel. The students arrived in large numbers and did not flinch when the police used pepper spray and batons. They quickly built barricades to block this key artery.

With the opening of Queensway Causeway and Lu Wong Road, along with the clearing of other roads in Hong Kong, the students have in a little over two days time seen their hold on several of Hong Kong’s commercial arteries ended.

Leung’s victory came at a cost. A TV station filmed police beating and kicking a handcuffed protester for four minutes. Reporters tweeted out photos of bruises they received, as policemen drove them away from the action.

A photo that will likely become iconic in capturing the ugliness of this night shows a protester with his hands up, unresisting, as a red-faced police officer soaks the protester’s face in pepper spray from inches away.

On the morning of Oct. 15, a crowd of around 1,000 assembled outside police headquarters. They did not come to protest, they came to file formal complaints of police misconduct.

The accusations of police brutality cut deeply in Hong Kong. The Hong Kong people have been accustomed to thinking of the police as a force that protects them, not one that, as in mainland China, oppresses the people.

The tear gassing of the students was a traumatic event for Hongkongers. The Canto-pop singing star Denise Ho wrote in an article in Apple Daily of the tears she repeatedly shed on watching the tear gas being used. Throughout the city there was grief and a feeling that a trust had been violated. The police brutality on Oct. 14 will deepen that loss of trust.

While the occasion for the mass protests that have convulsed Hong Kong has been the fight for universal suffrage, the belief that the civic compact is fracturing is the deeper cause for these protests.

Since the handover to the People’s Republic of China in 1997, Hong Kong has in name been governed under the policy of one country, two systems. But Hongkongers have witnessed one effort after another to fracture the system they inherited from the United Kingdom that affords them a capitalist economy, an independent judiciary, the rule of law, and protections for basic freedoms.

Leung has done yeoman’s work in damaging Hong Kong’s institutions. During his term, groups of thugs have had free rein in the city to harass Falun Gong practitioners and democratic activists. Press freedom has been badly damaged. And the integrity of the police has been compromised.

The sense that Hong Kong is under siege reached a peak when Beijing issued a “White Paper” on June 10 that redefined the policy of one country, two systems.

Rather than guaranteeing a high degree of autonomy, as the policy had formerly been understood, one country, two systems was said to allow Beijing to do whatever it wants in ruling Hong Kong. The special status of the Special Administrative Region was over.

This is a conclusion that Hongkongers can’t accept. And so they protest with an increasing feeling of desperation, looking for a way to save the Hong Kong they know from being taken from them.

Although Leung scored successes in the past few days, the students have not gone away. They are still in force near the Central Government complex, where they are encamped on two major roads, Harcourt and Connaught. If the pattern of these past weeks holds true, this weekend will see tens of thousands in the streets again.

At a press conference on the afternoon of Oct. 16, Leung, no doubt recognizing the force the students still pose, announced that he has held discussions aimed at starting negotiations with the Hong Kong Federation of Students, one of two student organizations that initiated the protests.

At the press conference, Leung simultaneously claimed that the talks cannot have preconditions and that allowing Hong Kong’s citizens, rather than a committee chosen by Beijing, to nominate the candidates for chief executive is not possible. He held out the prospect of a deal by suggesting the composition of the nominating committee could be discussed.

Such talks, which look like a victory for the students, carry their own set of dangers. Leung has no doubt been given his marching orders on how to quiet things down in Hong Kong, but his acting in good faith at the negotiating table would be very surprising. The Chinese Communist Party has never negotiated with or compromised with any group that opposes it.

In any case, Leung is the last person who can address Hongkongers’ real concerns.