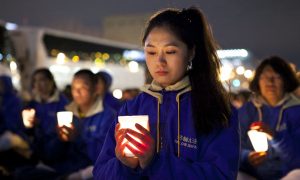 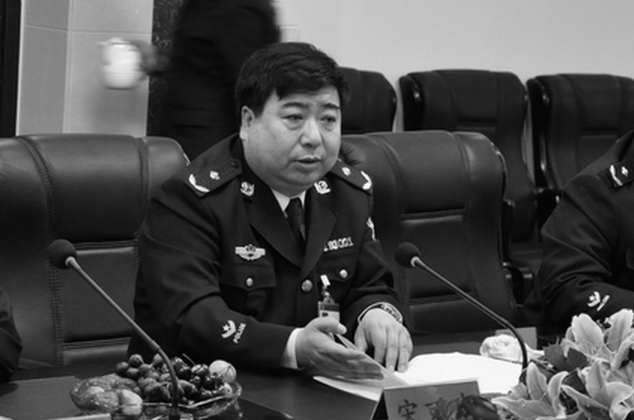 A screenshot from the official website of Liaoning Provincial Department of Justice shows Song Wanzhong, former director of Panjin Prison. Song is under investigation due to “severe violation of party discipline and law,” according to China’s anti-graft regulator on April 1, 2015. (Screenshot/Epoch Times)
China

Brutal Chinese Prison Head Finds Himself in the Party’s Crosshairs

The Panjin Prison in northeast China’s Liaoning Province, described in overseas reports as a “hell on earth,” is the site of horrific acts perpetrated by Chinese authorities against prisoners held for their faith in the traditional spiritual practice of Falun Gong.

Song Wanzhong, long-standing head of the infamous prison, was particularly enthusiastic about carrying out the Communist regime’s persecution: Abuses committed by staff there include beating and torturing Falun Gong practitioners to the point of death or disability. For his work, Song was awarded a position on the standing committee of Liaoning Province’s prison administration system in 2013.

Now, the Chinese regime seems to have tired of Song Wanzhong.

On April 1, the Communist Party’s anti-corruption agency announced that Song was under investigation for “severe violation of Party discipline and law.”

International human rights groups have identified Song on multiple occasions for his direct involvement in persecuting Falun Gong. According to reports by Minghui, a Falun Gong website that documents the Chinese regime’s persecution, at least eight practitioners were tortured to death at Panjin as of May 2013.

Some specific methods aimed at forcing practitioners to renounce their faith in Falun Gong include sleep deprivation, or electric shock, and force-feeding using plastic tubes inserted through the nostrils.

One anonymous practitioner who was detained and tortured at Panjin in 2007 was chained to a metal chair for 50 days, as reported by Minghui.

“I was chained so tightly that I could move only my head. My hands, feet, and legs were swollen like steamed buns,” the practitioner reported. “I was cursed at and threatened constantly. Other prisoners were tasked at all times with ensuring that I did not fall asleep. They woke me up every time my eyes closed.”

The author also indicated that he or she was forbidden from speaking or using a toilet, and was denied adequate clothing in the harsh northeast Chinese winter.

With the 2012 rise of the latest Party chief, Xi Jinping came a wide-reaching anti-corruption drive that has disciplined hundreds of thousands of Chinese officials, but the persecution of Falun Gong continues to the present day as entrenched Communist policy.

In announcing Song Wanzhong’s investigation, the Party’s anti-corruption agency makes no mention of his role in the persecution or of the abuses perpetrated under his direction at Panjin.

Instead, Song is given the typical slew of accusations levied against fallen Communist officials—acceptance of bribes, embezzlement of public funds, marital infidelity, and the like.

The decision to “eradicate” Falun Gong was made in 1999 by former Communist Party leader Jiang Zemin. Because of the practice’s massive popularity with the Chinese people, Jiang saw in Falun Gong an ideological threat to the atheist materialism promoted by the Communist Party. Simultaneously, with its apolitical nature and teachings of nonviolence, Falun Gong seemed to present an easy target for the regime’s security forces.

Things did not turn out in Jiang’s, or the Party’s favor. Facing the threat of beating, torture, sexual abuse, and even industrial-scale execution for their internal organs, Falun Gong practitioners gather online, abroad, and underground to offer nonviolent resistance to the state’s repression.

Marketed as an “anti-corruption campaign,” Xi Jinping’s recent political movement in fact targets officials based on their factional leanings. Prominent officials affiliated with Jiang Zemin’s wide-reaching political clique have been the principal object of Xi’s moves.

Jiang stepped down from his official post as general secretary in 2002, but many officials and communist functionaries who rose to power in the 1990s and 2000s, such as Song Wanzhong, were favored by Jiang Zemin and his cohorts based on their willingness to persecute Falun Gong.