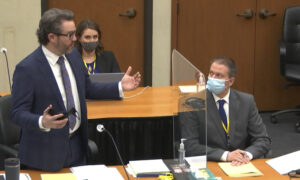 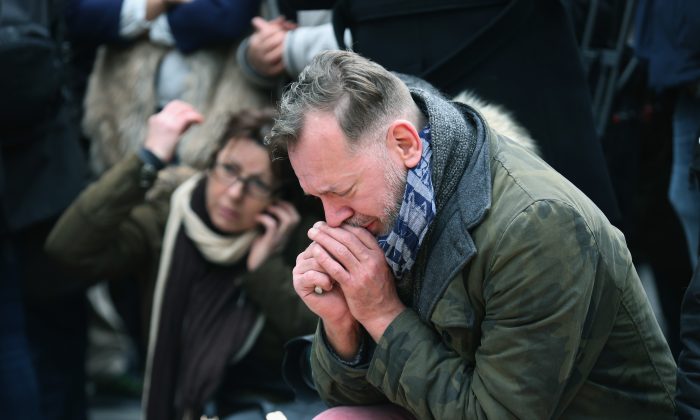 People observe a one minute silence at the Place De La Bourse in honour of the victims of yesterdays' terror attacks, in Brussels, Belgium, on March 23, 2016. (Christopher Furlong/Getty Images)
Opinion

The attacks of March 22 in Brussels were shocking, but not surprising. They reinforced what many have known for years: Belgium has a serious problem with terrorism.

For a long time, security analysts have expressed anxiety about the depth and extent of radicalization and fundamentalism in the country. It is thought that Belgium has the highest per capita rate of foreign terrorist fighters of any EU country. A February 2016 “high-end estimate” puts that number at 562 out of a population of just over 11 million.

Last November it was revealed that some of the Paris attackers had Belgian connections and were known to the security forces there, and Brussels was virtually locked down for almost a week.

Over recent years there have been attacks on Belgian museums, supermarkets and trains, raising questions about why the country cannot seem to effectively tackle the challenges of insecurity.

As ever, the answer is not a simple one. Rather, as observed by Tim King, Belgium’s “failures are perhaps one part politics and government; one part police and justice; one part fiscal and economic. In combination they created the vacuum that is being exploited by jihadi terrorists.”

So-called Islamist extremism in Belgium can be traced back at least to the 1990s, when Algeria-related militant activity in France spilled over into the country. The failure to properly tackle extremism in the 1990s and early 2000s, and to effectively integrate the minority Muslim community, are important factors in understanding how Belgium became fertile ground for radicalization.

It seems increasingly likely that poorly resourced and fragmented policing at least partly explains the crystallization of this trend into fatal attacks in and beyond the country. And that is linked to the country’s relative political instability.

Belgium has a sharply fragmented system of policing and justice. In Brussels alone there are six police forces covering 19 communes; an extraordinary system for a city of just under 1.5 million people. While the federal police system includes a counterterrorism unit of around 500 officers, this seems simply insufficient when compared to the estimated scale of the problem.

Intelligence sharing with non-Belgian forces is also challenging, and remains so in spite of an agreement for enhanced cooperation with the French announced in early 2016. That agreement followed a period of tension related to the role of Belgian and French security failures in respect of the Paris attacks.

Questions for the European Union

However, while the particularities of Belgian politics and policing are relevant to explaining the challenge there, the country is not entirely idiosyncratic. Its challenges are a sharpened manifestation of similar difficulties experienced across the EU.

Many European countries have long struggled to integrate marginalized populations and to counter radicalization, and their internal failures are becoming transnational problems.

Europe has an increasing amount of shared counterterrorism law and institutions such as the European Counter Terrorism Center within Europol, that are designed to help coordinate counterterrorism. Yet it still struggles to share and process information across police and security forces. That is true within states, between member states, and between member states and EU institutions. Many individual European countries have long struggled to integrate marginalized populations and to counter radicalization, and their internal failures are becoming transnational problems.

It is also becoming clear that the ease with which people can travel across Europe, and the desire to maintain freedom of movement as a feature of European citizenship, must be addressed. There are real questions about security, but just as many about what imposing more onerous barriers to travel means for the values and freedoms that underpin the European Union as a political entity.

This points to the fundamental challenge that must, ultimately, be addressed by European leaders. Serious threats to European security are no longer merely external, nor are they confined to states. They are internal, they are serious, and they are difficult to detect. Tackling them effectively while retaining the core of the European political identity may require a fundamental reassessment of what Europe is, what it wants to be, and how that can be achieved.

Passing new counterterrorism laws is a limited response in the face of this challenge. Domestic police and security forces urgently need effective resources to make it possible for them to enforce the powers they already hold. There needs to be significantly better intelligence sharing with and through institutions such as Europol. There needs to be deeper trust between EU member states. There needs to be a serious consideration of the extent to which movement within Europe can be both free and less risk-laden.

Figuring out ways of creating effective expectations that member states will ensure their domestic security challenges do not create Europe-wide vulnerabilities, while maintaining our identity as a law-based, rights-oriented Europe of freedoms must be the goal, but it is a difficult one to achieve.

The question now is whether Europe can resist compromising its commitment to freedom as it strives to improve its ability to deal with terrorism.

Fiona de Londras is a professor of global legal studies at Birmingham Law School, University of Birmingham, in the U.K. This article was originally published on The Conversation.