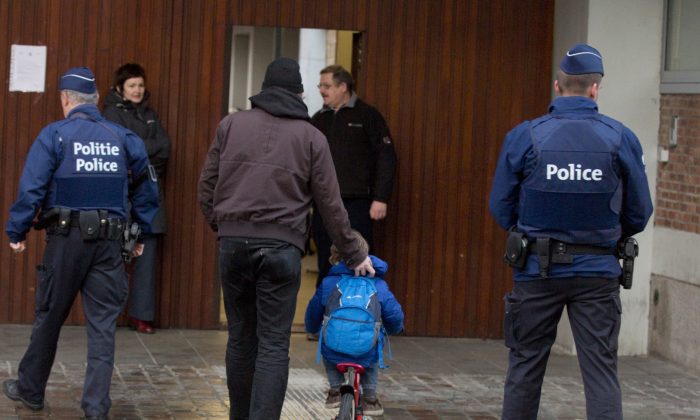 A man wheels a boy on his bicycle past police officers as they arrive for school in the center of Brussels on Wednesday, Nov. 25, 2015. (AP Photo/Virginia Mayo)
Europe

BRUSSELS—After a four-day shutdown prompted by a threat alert across Brussels, schools are reopening their doors with the help of beefed up security, including police armed with machine guns.

Though the Belgian capital continues to be under the highest-level threat alert, meaning that an attack is serious and imminent, schools and subways began reopening across the city on Wednesday. That is restoring a sense of normality to the city, parts of which have been deserted since the alert was first raised to the top level in the capital on Saturday.

The threat level is expected to be in place until at least Monday unless there are significant developments, like the capturing of suspects linked to the Paris attacks on Nov. 13.

At Brussels’ College Saint-Jean-Berchmans, some parents gave their children a quick kiss before dropping them off, while several police officers guarded the entrance, including one with a visible machine gun. Among the students at the school is Belgium’s Princess Eleonore.

“I’m concerned, but I think that life must go on,” said Dimitri De Cra Yencour, a father of four. “Even if something happens in Paris or in Brussels, they have to go back to school,” he said, adding he had instructed his children be extra attentive and to tell their teachers if they saw anything unusual.

Brussels to Stay on Highest Threat Alert Into Monday

At other schools in the region, officials sent parents letters and emails explaining security measures being taken under police orders, like limiting access to the school and not allowing children to play or gather in large spaces like courtyards.

Some children looked visibly worried as they arrived at the upscale Brussels school but most gave a friendly handshake to a burly school official guarding the entrance alongside the police officers.

Father Didier Nkoy Balengola said he had explained to his children that “there are some bad men who for no reason want to hurt innocent people” but he had confidence in the police.

Others said that after the terror-sparked school vacation this week, it was definitely time for classes to re-start.

“It was like Christmas come early for the children,” said Annalaure Leger, a mother of two. “They stayed at home and played with the neighbors’ kids.” Leger said their family lives partly in Paris and that the children are very aware of what’s happening both there and in Belgium. She said that Wednesday’s school drop-off wasn’t much different from any other day, except for the presence of camera crews snapping their arrival.

Leger said that neither she nor her children were too concerned about an imminent attack.

“It would be better if the police had caught the terrorists, but the children know they are trying to do that so that everyone is safe.”