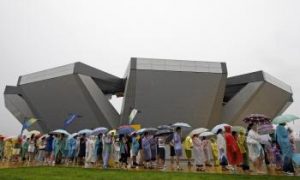 Nathan Horton #18 of the Boston Bruins celebrates with Milan Lucic #17 after Horton scored the winning goal in overtime against the Montreal Canadiens in Game Seven of the Eastern Conference Quarterfinals of the 2011 NHL Stanley Cup Playoffs. (Jim Rogash/Getty Images)
Hockey

By James Fish
Print
The Boston Bruins hung on after losing the first two games to win the best-of-seven first round playoff series against old rivals the Montreal Canadiens.

Down 0–2, Boston fought back to win three, two in overtime, but couldn’t close it out Tuesday night in Montreal. So the Bruins came back to Boston to fight for their lives on home ice.

On Wednesday night, in the ninth Game Seven of their 33rd series against the Canadiens, the Bruins got the overtime goal they needed to advance in the NHL Playoffs. The Habs will head home.

“[Carey Price] is such a great goaltender you know you’re not going to beat him clean so you try to get rebounds and, at the end there got a nice little deflection and it went in.”

“It’s always tough when you let a lead slip but we stuck with it. We battled for ourselves, we battled for each other, and were back.”

The Bruins came out hot, scoring two goals in the first six minutes. Johnnuy Boychuck netted a slapshot form near the blueline, and Mark Recchi picked up a deflected pass wide open, 25 feet in front of the net, and beat Carey Price stickside.

After that the Canadiens toughened up, and it became a typical Bruins—Habs matchup: hard hits, good puck control by the Canadiens, and great effort from the Bruins to stay in the game.

A hooking call on Bruin Michael Ryder gave the Habs a man advantage halfway through the period, and they didn’t waste it. Daniel Paille lost his stick in the Bruins end, and the Canadiens took advantage. Sending a pass to his side of the ice which Yannick Weber blasted by Boston goalie Tim Thomas.

The Bruins powerplay had been pathetic throughout the series, and in the final game it reached a new low. With a man advantage five minutes into the second period, Canadien Tomas Plekanec picked up a bad pass and skated right in on Thomas, scoring the shorthanded goal which tied the game.

The rest of the second period and most of the third was a study in extreme goaltending. Tim Thomas and Carey Price kept their teams in the game despite repeated, serious tests.

Halfway through the third period the Bruins took the lead when Chris Kelly bulldozed Roman Hamrlik, then skated in front of a shot by Andrew Ference. Kelly slammed the bouncing puck past Carey to give Boston fans hope.

PK Subban stole that hope away in the final two minutes after Patrice Bergeron hit James Wisniewski in the face with his stick. On the ensuing powerplay, Subban found himself wide open in the left-hand circle, and he fired a fifty-footer which sent the game into overtime.

Overtime lasted barely five minutes. While the Canadiens seemed to have better puck control, the Bruins were relentless, and managed to work the puck free to Nathan Horton whose slapshot bounced through a crowd and snuck by Carey Price, sending the Bruins deeper into the Stanley Cup Playoffs.