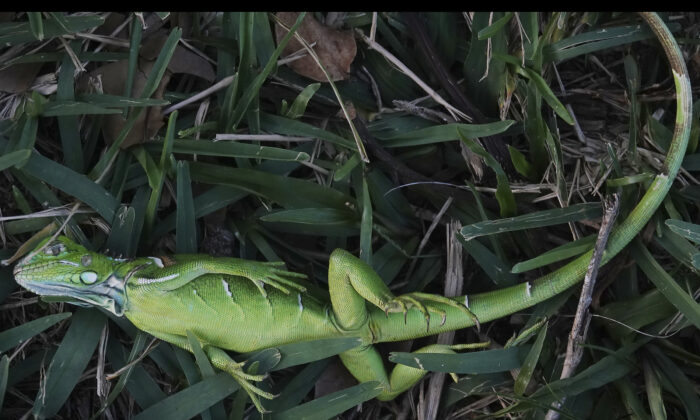 Brrr! It Got so Cold in Florida, Iguanas Fell From Trees

ST. PETERSBURG, Fla.—A cold snap in Florida is different than in other places. We put on heavy coats when it’s 50 degrees Fahrenheit (10 degrees Celsius).

No blizzard conditions here in the Sunshine State, but we have our issues as well when the thermometer drops.

The National Weather Service said Sunday it’s all going to warm up nicely after the weekend. The low temperatures near freezing are quite rare in Florida, but at first glance the citrus, strawberry, and tomato winter crops suffered no major damage. Farmers spray water onto the crops to help protect them from the cold.

As for iguanas, well, that’s another matter. They are an invasive species, well accustomed to the trees of South Florida. When it gets cold, below 40 degrees Fahrenheit, they go into a sort of suspended animation mode. And they fall to the ground.

But they usually wake up with the sun’s warmth.

It got cold in Florida this weekend. The National Weather Service reported that West Palm Beach hit 37 degrees Fahrenheit, the coldest morning of the past 12 years. Up the East Coast in Vero Beach, the record low was tied at 30 degrees Fahrenheit, set in 1978.

Still, it’s not like a white-out. The Gasparilla pirate parade in Tampa, which was not held last year because of the coronavirus pandemic, went off without a hitch Saturday in sunny but chilly weather. Thousands of people did pirate-y things, snagged beads from the parade route, and generally ate, drank and were merry.

Yet the unseasonably cold weather in Florida prompted one church on the Gulf of Mexico side of the state to rethink how it would welcome parishioners and visitors.

St. Michael the Archangel, on Siesta Key, canceled its two scheduled Masses on Sunday because it was too cold. The church is going through a renovation and has been holding Mass outdoors, as it did on Saturday afternoon in 49 degree Fahrenheit temperatures and with brisk winds making it feel even colder.

Masses have been held under a tent, but Saturday’s wind dislodged one of the support posts and rendered the temporary structure unsafe. The Rev. Michael Cannon was offering the sacrament of communion Sunday—drive-thru style—but Mass would not be held, in anticipation of temperatures falling into the mid-20s shortly after sunrise in the Sarasota area.

“It would not be wise to have Masses with those kinds of temperatures,” Cannon said.

The church is expected to be fully functional again with completed renovations by Easter.

And it’ll be beach weather again in Florida soon. It always is.