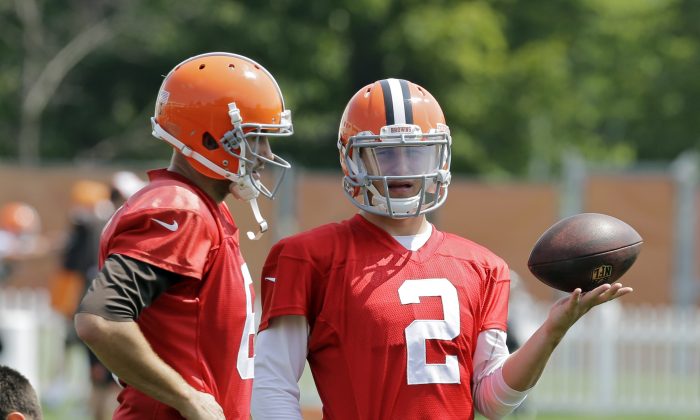 The Rams will play the Browns at 8 p.m. ET. A live stream is available.

ST. LOUIS (AP) — More than most, Kenny Britt can relate to the drama unfolding just a few miles from RamsPark in Ferguson.

The St. Louis wide receiver and former 2009 first-round draft pick feels strongly that the trouble in Ferguson, scene of so much unrest following the fatal shooting of an unarmed black 18-year-old by a white police officer, is not so much a race issue as it is one of power.

“I can identify 100 percent with what they’re going through,” Britt said of Ferguson residents. “Especially as a young kid growing up, I’ve seen it. When people have power they tend to use it. I have a 13-year-old brother and I’m in the NFL and he’s calling me saying the cops are following him around the block.”

The bottom line: “It’s sad to see the same thing is happening over and over.”

Britt has had numerous brushes with the law, making the news for the wrong reasons three straight years earlier in his career when he was with the Titans. In 2013, he was questioned by police when a close friend was involved in a stabbing, a year after being cited for resisting arrest and then suspended for the opener after a DUI arrest. In 2011, he was arrested in New Jersey following a car chase with police

Britt, other members of the Rams and players for baseball’s Cardinals are all playing or living within only a few miles of Ferguson. To a man, those willing to discuss the incident with The Associated Press were careful with their opinions about the rioting and looting since Michael Brown was shot to death Aug. 9.

“I don’t know if the cops were overly aggressive, or what happened with the protesters,” Britt said. “It’s kind of hard when people with a voice (are) not saying anything.”

Offensive tackle Joe Barksdale, who grew up in Detroit, wondered about the rationale for looting: “What’s even more messed up is people destroying their own communities.”

Whether it’s preparing for preseason games and trying to survive looming cut-down days or gearing up for the postseason chase, the Rams and Cardinals can’t help following the day to day events. The Rams earlier this week invited football teams from disrupted high schools to practice at their indoor facility. They also provided 75 complimentary tickets to the schools.

The Rams have drawn headlines this year for becoming the first NFL team to draft an openly gay player in Michael Sam. That was 77 years after the franchise, then in Los Angeles, was the first to sign a black player in the post-World War II era in Kenny Washington.

Coach Jeff Fisher said the team had been “brainstorming” how to get involved and thought of kids who are being deprived.

“It’s just very, very sad and we hope that things get worked out as soon as they possibly can, but this is different,” Fisher said. “This is football players. This will be something that I hope they’ll always remember.”

Britt said that never happened when he was a kid.

“To see kids here and be inspired by players like us,” he said, was encouraging.

After a recent 6-1 home stand, Cardinals manager Mike Matheny said he hoped his team’s surge during the dog days of August would provide a welcome diversion. Maybe common ground, too.

“I think baseball, not just in St. Louis but in the country, has served very well in that regard,” Matheny said. “It seems like baseball is a great focal point.”

The case hit close to home for Padres reliever Blaine Boyer, who played for the Cardinals in 2009.

“When you have people marching the streets and it’s one group against another, it’s scary,” Boyer said. “Whenever you have someone who loses their life, we should all pay attention.”

At the least, the players hoped the games and training camp tidbits provide a welcome diversion in St. Louis.

“I think a lot of us are aware of what’s going on with that,” Packers quarterback Aaron Rodgers said after Green Bay’s preseason victory over the Rams in St. Louis. “Sports, at times, have been able to heal a country in terms of bringing people back together.”