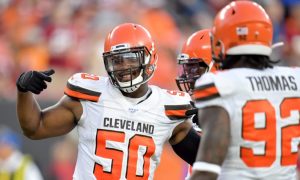 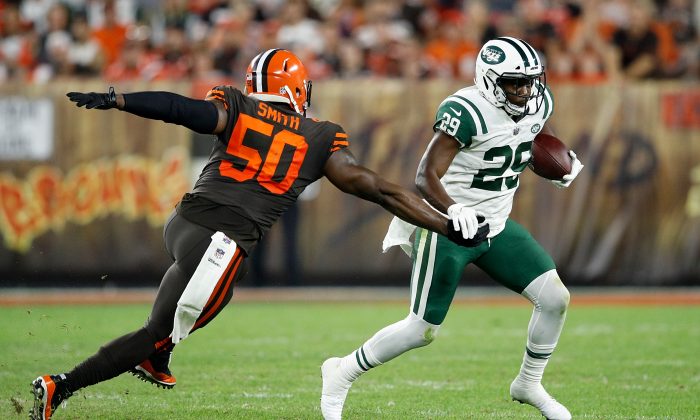 Bilal Powell #29 of the New York Jets carries the ball in front of Chris Smith #50 of the Cleveland Browns during the second quarter at FirstEnergy Stadium in Cleveland, Ohio, on Sept. 20, 2018. (Joe Robbins/Getty Images)
NFL

Cleveland Browns defensive end Chris Smith played in the first game since the sudden death of his girlfriend, helping his team win against the New York Jets.

Smith, 27, showed reporters after the Sept. 16 game a new tattoo he got on the inside of his forearm that says “stay strong.”

His girlfriend, Petara Cordero, had the same tattoo on her chest.

“She always had this tattoo that said ‘stay strong.’ I used to always pick at her about it. ‘Why don’t you just get more tattoos.’ We’re using it now,” Smith said, according to the team’s website.

Cordero, 26, was a passenger in Smith’s car when he hit the median early Sept. 11 after a tire blew out. She did not suffer serious injuries, but after exiting the car, she was hit by a female driver who police said admitted to driving under the influence.

Smith said the situation was tough but he asked team leaders, including owner Jimmy Haslam, on Friday if he could play in the game.

“When that first happened, I felt like I was ready to give up, throw in the towel, retire and stuff. I had to just think about my daughter and she would have wanted me to play. Freddie doesn’t realize it, but he said in a team meeting, when we go off emotion we make wrong decisions,” he told reporters.

“We have to go off our passion. I have to play for her. She’s my why. My daughter is my why, my other two kids are too. For my youngest, I’ve got to be mom and dad. She’s in a better place now. For the rest of my life, I’m going to fight for her.”

God has a plan for all of us we can’t understand but she is in a better place now and she can rest easy. My wifey my best friend and the mother of my beautiful daughter. Love you baby❤🙏🏾 #StayStrong🙏🏾🥰❤ #RIPMyLove

I’m so thankful to have another beautiful gift in this world my daughter Haven Harris Smith. You are such a blessing to me and your mother!! Love you Petara and Baby Haven❤❤❤

Cordero had given birth to the couple’s child just weeks before the death.

Smith posted a picture of Cordero on Instagram, adding in a caption: “She is in a better place now and she can rest easy. My wifey my best friend and the mother of my beautiful daughter. Love you baby.”

On Instagram Story, he added that he got the words “stay strong” tattooed on himself along with several other loved ones.

Smith announced just hours before the game that he would be playing in honor of Cordero.

“I am going to play tonight because it is something she would want me to do. She would want me to keep doing what I love and stay strong. I play for her tonight. She is my why,” Smith said in a statement. Head coach Freddie Kitchens checked in with him on Sunday, two days after he requested permission to play, and confirmed that stance.

A spokesperson for Smith said on Monday that both the Cordero and Smith families wanted to thank supporters “for their thoughtful prayers, condolences, and well wishes.”

“From the bottom of their hearts they are grateful for the tremendous outpouring of support,” the statement continued.

“At this time, they ask for complete privacy as both families take the time needed to grieve the sudden and unexpected loss of their beloved Petara Cordero.”