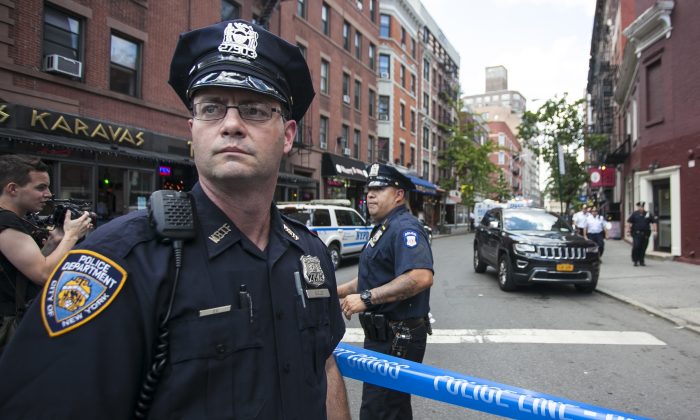 Police-worn cameras would act as an impartial witness to the interaction, whether bystanders were recording or not. (Samira Bouaou/Epoch Times)
Crime and Incidents

NEW YORK—When a face off between two men on a street in Ferguson, Missouri earlier this month ended with one dead, it was followed by a maelstrom of violence, looting, and outrage. Amid a lack of information about what really happened, protestors speculated widely.

Many have characterized the shooting of Michael Brown, a young African-American, as a racially-motivated act of brutality by a white police officer.

The police report describes Brown as a robbery suspect who was being pursued, and that pursuit ended in his demise.

In fact, only police officer Darren Wilson, who fired at least six shots at Brown, may know exactly what happened. Brown’s friend Dorian Johnson has publicly said that he saw Brown shot in the back, which conflicts with an independent autopsy report ordered by Brown’s family that six shots entered his body from the front.

The problem with these narratives is that there is simply no proof—therefore one response to the killing has been a petition calling for a law to compel all police officers to wear cameras.

If the encounter had been recorded on a body-worn police camera, there would be at least one version of the truth that could be used as evidence, and could not be altered or swayed by public opinion. But in Ferguson, as well as in most other police precincts across the U.S., body-worn police cameras are simply not used.

For those places that do use them, some say it has helped build trust.

“The reality is that law enforcement can’t do its job without the support of the community,” said Michael Kurtenbach, commander of the Phoenix Police Department’s Maryvale Precinct in an interview with the Arizona State University’s Center for Violence Prevention and Community Safety. The Center has been researching the effectiveness of video cameras worn by police officers.

Maryvale’s 56 cops were equipped with body-worn cameras after a physical confrontation between a City Council member and a local officer.

“One word that you hear repeatedly is transparency,” said Kurtenbach, who argues that video shows that police in his precinct largely perform well. He added that “It’s incumbent upon us as an organization to prove that we are doing things the right way, in accordance with policy and with law.”

A handful of other cities have similar programs: Rialto and Fresno, California; Salt Lake City; and Mesa, Arizona to name a few.

New York City’s Public Advocate Letitia James wants the same for the country’s largest police force of nearly 35,000. James has proposed a pilot program for body-worn cameras that would equip 15 percent of the city’s police. The units come as either cigarette-pack or pager-sized cameras worn on the shoulder, or small cigar-shaped cameras worn above the ear or on the shoulder.

They record interactions with the public from the police vantage point, capturing at least part of whatever scene unfolds, and the video is uploaded to a database after each encounter.

In New York City’s case, where bystanders often record police interactions with citizens in public, it would be another piece of the picture.

In July, the death of Eric Garner during his arrest was recorded by a bystander. And it is difficult to see what happens in the video, though it was only taken from a few feet away.

A Question of Force

The larger question raised, though, is how often the NYPD is using more force than it is allowed.

In 2013, according to James, the city paid out $152 million in judgements over complaints of police brutality. Among the complaints received by the independent Civilian Complaint Review Board, over 1,000 were of people who said they were put in chokeholds. The NYPD outlawed the use of chokeholds in 1993. Police-worn cameras would act as an impartial witness to the interaction, whether bystander recordings exist or not.

Sean Basinski, director of the 20,000-member Street Vendor Project at the New York City-based Urban Justice Center, said that his organization helps train vendors to record police interactions with the public with their cell phones, much like in the case of Eric Garner. Yet in the heat of the moment, he said “it’s hard to keep that camera rolling.”

“Instead of putting the burden on street vendors or on passersby, the burden should be on the NYPD,” said Basinski when he joined the public advocate in calling for a city pilot program.

“We are reserving our decision on body cameras until we see some real evidence of their effectiveness and impact on the officers who carry them,” the PBA said last week in a statement. The head of the PBA, Pat Lynch, has also said that a video that appears incriminating is no substitute for the rule of law.

“We support the right of every individual to voice their opinion,” said Lynch in an August 15 statement. “We also support the concept of due process that some seek to deny police officers.”

Since citizens have the constitutional right to film police carrying out their duties, a fact reiterated in an NYPD memo sent to rank and file officers Aug. 6, according to the Daily News, bystander video is likely to become more common. That, argues Robert Gangi, director of the Police Reform Organizing Project, is all the more reason to equip cops with their own recording devices.

“The value clearly is, in our view, to curb abusive police conduct and to be better able to hold police accountable when they engage in objectionable police behavior,” said Gangi.

“The other is to protect police from bogus charges. Having the interactions filmed makes it more likely that the police officer and the New Yorker they are engaged with will engage in a civil manner and reduce the stress and tension that often is an all too real feature of interactions with police.”

If public pressure continues to mount, debates at the municipal level might become a moot point. Two public petitions now circulating—one of which is hosted on the White House’s petition platform—are calling for a national law to require all state, county, and local police officers to wear cameras. It is called Mike Brown’s Law.

For Gangi and the nearly 160,000 petition supporters, it’s the logical thing to do.

“We see enormous value in having police officers wear body cameras,” said Gangi. “It will likely lead to a more constructive and collaborative relationship between the police and the public.”