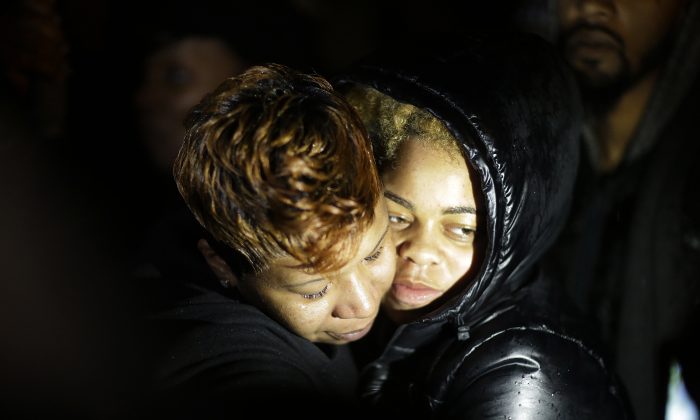 Lesley McSpadden (L), the mother of Michael Brown, embraces a supporter during a demonstration at the memorial near where the black teen was shot and killed by a white policeman more than three months ago, Saturday, Nov. 22, 2014, in Ferguson, Mo. (AP Photo/David Goldman)
Ferguson

FERGUSON, Mo.—Hundreds of additional National Guard troops rolled into Ferguson on Tuesday, a day after protesters looted businesses and set fire to buildings in a night of rage against a grand jury’s decision not to indict the white police officer who killed Michael Brown.

Meanwhile, officer Darren Wilson broke his long public silence, insisting on national television that he could not have done anything differently in the confrontation with Brown.

In the aftermath of Monday’s violence, Missouri governor Jay Nixon more than tripled the number of Guard soldiers sent to the St. Louis suburb, ordering the initial force of 700 to be increased to 2,200 in hopes that their presence would help local law enforcement keep order in the St. Louis suburb.

“Lives and property must be protected,” Nixon said. “This community deserves to have peace.”

About 50 protesters converged on a barricade guarded by 30 Guard members. The group chanted “Whose streets, our streets,” ”This is what democracy looks like” and “Hands up don’t shoot.”

Two protesters wearing masks were arrested after refusing to comply with police instructions to get out of the street.

During an interview with ABC News, Wilson said he has a clean conscience because “I know I did my job right.”

Wilson had been with the Ferguson police force for less than three years before the Aug. 9 shooting. He told ABC that Brown’s shooting marked the first time he had fired his gun on the job.

Attorneys for the Brown family vowed to push for federal charges against Wilson and said the grand jury process was rigged from the start to clear Wilson.

“We said from the very beginning that the decision of this grand jury was going to be the direct reflection of the presentation of the evidence by the prosecutor’s office,” attorney Anthony Gray said. He suggested the county’s top prosecutor, Bob McCulloch, presented some testimony to discredit the process, including from witnesses who did not see the shooting.

During the protests that erupted after the grand jury’s decision, 12 commercial buildings in Ferguson burned down, and firefighters responded to blazes at eight others, fire officials said. Other businesses were looted, and 12 vehicles were torched.

Natalie DuBose, owner of Natalie’s Cakes and More, planned to spend Tuesday night at her business, which is only about a block from the Ferguson Police Department.

A window at her business was busted out in Monday night’s turmoil.

“This is my livelihood,” she said. “This is the only source of income I have to raise my children.”

Brown’s parents made public calls for peace in the run-up to Monday’s announcement, and on Tuesday, their representatives again stressed that the people setting fires were not on Michael Brown’s side.

Videos that were widely circulated on Tuesday showed Brown’s mother, Lesley McSpadden, standing on top of a car and breaking down as the announcement of the grand jury decision blares over the stereo.

Her husband, Brown’s stepfather, comforts her, then begins angrily yelling “Burn the bitch down!” to a crowd gathered around him. Asked about the comment at a news conference, family attorney Benjamin Crump said the reaction was, “raw emotion. Not appropriate at all. Completely inappropriate.”

Protests continued during the day on Tuesday. In Clayton, where the grand jury met, clergy members and others blocked morning traffic for several hours. In downtown St. Louis, where demonstrators swarmed the steps of a federal courthouse and stopped traffic, at least four people were arrested.

Many school districts canceled classes out of concern for the safety of students traveling to and from school.

Testimony from Wilson that he felt threatened, and physical evidence almost certainly complicates any efforts to seek federal charges.

The Justice Department has also launched a broad probe into the Ferguson Police Department, looking for patterns of discrimination.

Attorney General Eric Holder said the department aims to complete those investigations as quickly as possible “to restore trust, to rebuild understanding and to foster cooperation between law enforcement and community members.”

Regardless of the outcome of the federal investigations, Brown’s family also could file a wrongful-death lawsuit against Wilson.

Speaking in Chicago, President Barack Obama said he knows the grand jury’s decision “upset a lot of people” but that the “the frustrations that we’ve seen are not just about a particular incident. They have deep roots in many communities of color who have a sense that our laws are not always being enforced uniformly or fairly.”

Wilson’s lawyers issued a statement praising the decision and saying the officer is grateful to his supporters.

Scott Holtgrieve, a St. Louis County man who attended an August fundraiser on Wilson’s behalf, always viewed with skepticism witness accounts that Wilson shot Brown while Brown held his hands up in a form of surrender and was on his knees.

“What they were saying just didn’t seem rational — that an officer would shoot someone in cold blood that way at point-blank range, especially in that neighborhood where you know a lot of people are watching,” Holtgrieve said.