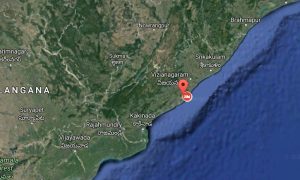 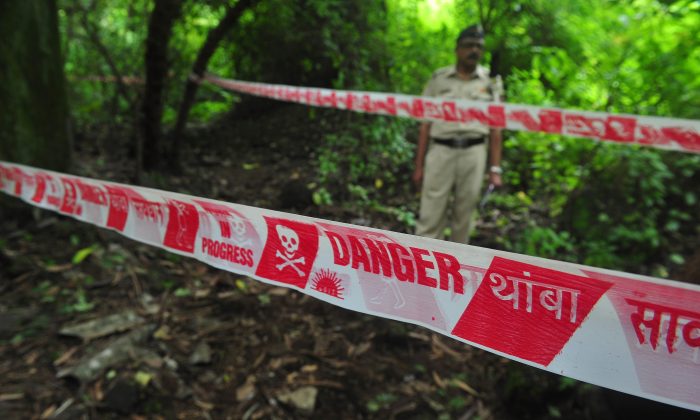 In this file image policeman keeps watch near a police cordon of the crime scene in the Shakti Mills area, where a female photographer was gang-raped overnight, in Mumbai on August 23, 2013. (Indranil Mhukherjee/AFP/Getty Images)
US News

Brothers, Uncle Accused of Rape and Murder of 12-Year-Old Girl in India

The brothers and uncle of a 12-year-old Indian schoolgirl whose headless body was found last week have been accused in her rape and murder.

The shocking case is the latest high-profile sexual assault to shake the country, which has long-struggled with sexual violence and the surrounding social mores of family shame, “honor,” and cover-ups.

The girl, who has not been named by authorities, was reported missing on March 13, and her decapitated head was found along with her body the following day in an agricultural field near Berkhedi, reported the Hindustan Times.

The police offered a reward of 25,000 Rupees ($360) for information on the murder of the girl, who belonged to the Dalit, once known as the “untouchables,” the lowest level of India’s rigid 1,300-year-old caste system.

Investigators determined that she had been raped and strangled to death before her head was cut off with a sickle, reported NDTV.

The family had initially claimed that she had been kidnapped and killed by neighbors in their village in Sagar as revenge over a land dispute.

On March 19, however, authorities announced that her family members were being charged over her rape and murder. The girl’s aunt is also being accused for her alleged role in the crime.

The incident took place in Madhya Pradesh, a populous central state with the highest number of rape cases.

“Our two senior officers collected all evidence and recorded the statements of the family members,” Sagar’s superintendent of police Amit Sanghi said, according to the Hindustan Times. “When everything was pieced together, we found that she was raped and murdered by her brothers and uncle.”

The girl’s eldest brother, 22, is accused of first abducting her and taking her to his uncle’s house, according to the police account, reported the New Indian Express.

“On that day everyone was out for work except the elder brother, and taking advantage of this he raped his sister,” he said. “While in the act, the other two brothers, including the minor, came and they both raped her. Meanwhile, the girl’s uncle, who is in his late forties, also came by. Initially, he scolded everyone and then he too raped her.”

When she threatened to tell the police, they allegedly killed her.

According to police, the aunt may have been present during the assault, assisted in the murder, and later tried to cover up the crime by implicating the neighbors.

Three of the four accused, including the deceased girl’s uncle and her two brothers, have been arrested, while police are carrying out raids to track down the eldest brother. Police said that the aunt would also be charged, according to media reports.

India’s sexual violence problem was highlighted in 2012 by the high-profile case of an 8-year-old girl who was drugged, raped multiple times and murdered before her body was thrown out on the street.

She later died of her injuries, making headlines across the globe. She became known by the name of “Nirbhaya,” which means “fearless” in Hindi, since Indian law prevented disclosure of her real name.

In 2017, four men were sentenced to death for her rape and murder.

Earlier this month, a woman killed the man who sexually assaulted her, dragging him into the flames after he set fire to her, according to reports.

Police said the woman survived the attack and suffered burns to her hands and face, while the man died from his injuries at a nearby hospital.

The 35-year-old woman, who was not identified, told police that her 42-year-old male assailant attacked her inside her home in February in India, according to the AFP news agency. Her three daughters were out of the house when it took place.

“Then he poured kerosene on her body and set her on fire,” police officer Sajal Kanti Biswas told the news agency. The Times of India reported she grabbed him while she was still on fire, leading to his death.