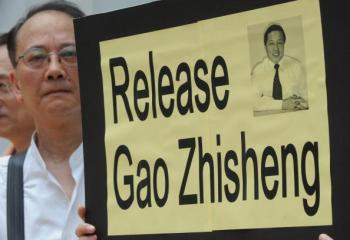 The whereabouts of Chinese human rights attorney, Gao Zhisheng, remain unknown several months after his arrest by police in February. His wife, Geng He, has revealed that Gao’s eldest brother has recently set out to look for him in Beijing.

Geng He now resides in the United States with her children after escaping from China shortly after her husband’s latest arrest. During this time, Geng said that she has kept in close contact with Gao’s eldest brother. On the morning of June 15, Geng received a call from this brother, who said that the Beijing public security refused to take on his case and search for Gao.

Geng said that Gao’s brother had attempted to go to the public security bureau but was denied entrance. She also said that he went to report his case to the local police substation where Gao was once detained but was ignored by the substation staff.

According to Geng, the substation forbade Gao’s brother from temporarily staying at Gao’s Beijing home, giving the reason that Gao had never authorized anyone to stay there.

Geng said that, Gao’s brother, who is a farmer going to Beijing for the first time, “is furious that he has no place to stay.” Worrying for his safety, she appealed to the international society to pay attention to the situation and safety of both Gao and his brother.

“The children say every day that they want to talk to their dad,” said Geng.

Gao Zhisheng was named one of China’s top 10 lawyers by the Chinese regime in 2001, however he was disbarred by communist authorities in 2005 after calling for an end to the persecution of Falun Gong in a series of open letters to the Chinese leadership.

Since then Gao has reported attempts on his life and has been arrested several times. Earlier this year, his family published a letter from Gao that detailed barbaric torture he suffered during a two month period at the hands of his jailers.

Recently, U.S. Senator Byron Dorgan wrote a letter to inquire about Gao’s disappearance. In response to his letter, Chinese ambassador Zhou Wenzhong replied that Gao is currently serving probation. However, multiple overseas organizations have recognized the Chinese regimes’ treatment of Gao as an act of abduction.