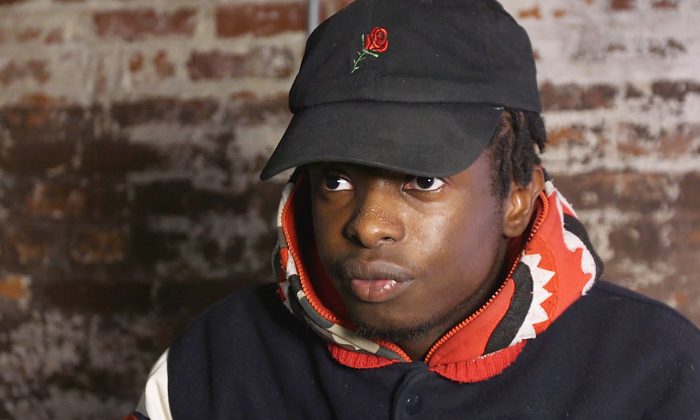 Eddie Carter talks about his younger brother, who authorities say was held in a suburban basement, during an interview in Birmingham, Ala., on Nov. 25, 2016. (Ian Hoppe /AL.com via AP)
Crime and Incidents

Brother of Captive Teen Recalls His Time in Basement

BIRMINGHAM, Ala.—Few can know or imagine what it’s like being locked in a basement for days, weeks or months, denied the basic needs such as food, water, a bathroom. Denied, even, sunshine or love.

Eddie Carter knows. He is the biological brother of a 14-year-old boy rescued from a Helena basement three weeks ago. Carter’s brother weighed only 55 pounds when hospitalized.

Carter says he suffered the same neglect, abuse and despair, at the hands of the adoptive parents, both of whom remain jailed on $1 million bond.

“You’re down there and nobody knows you’re down there except the people in the house,” said Carter in interviews with AL.com. “It’s up to those people to make sure everything’s going to be all right and it’s not all right and you’re kinda lost. You sit in the corner and weigh out what means the most. It was horrible. Horrific.

Now 18 and far removed from Alabama and his brother, it’s all coming back to Carter with news of his baby brother, who is still recovering.

“There is a little hate building up inside for the people who did this,” Carter said. “But Thanksgiving just passed and there is a lot I have to be grateful for. He’s one of them. He’s alive and it could be worse, so I keep that in mind.”

The plight of Carter’s brother’s came to light the weekend of Nov. 12 when the young Helena teen was taken to a hospital, Children’s of Alabama. Helena Police Chief Pete Folmar said the boy was kept in “forced isolation” and was described by doctors as severely and chronically malnourished, dehydrated, suffering from acute respiratory distress, shock, hypothermia, hypothyroid and close to death.

His adoptive parents, Richard and Cynthia Kelly, ages 56 and 47, two days later were charged with aggravated child abuse and have remained behind bars in Shelby County since their arrest. They are set to appear in court on Dec. 14 and 15 for preliminary hearings, and their attorneys have not responded to requests for comment.

According to the arrest warrants for the parents, the couple is accused of denying food, nourishment and medical care to the boy, who was “subjected to forced isolation for extended period of time.” Authorities have said that “isolation” was disciplinary in nature. There were no signs, however, the boy was handcuffed, chained or restrained.

Neither Richard nor Cynthia Kelly, who have lived in Helena for about 20 years, show any previous criminal record in Alabama. Richard Kelly worked in the computer technology field but had been unemployed for several weeks at the time of his arrest. Cynthia Kelly was a stay-at-home mother who home-schooled her adopted children.

Neighbors said they were stunned by news of the boy’s condition and the arrests. Though the family kept to themselves and didn’t socialize with others in the neighborhood, they said they saw no signs of anything amiss at the home. They only saw the 14-year-old son occasionally cutting grass with Richard Kelly watching over him.

“He was so small, I thought he was about 8 or 10,” said next-door neighbor Troy Clayton. “It took all he had to push the lawnmower.”

Cynthia Kelly’s Instagram account, which has recently been deleted, depicted a life far different from what authorities describe. She had one account just for her dog, Kennedy Ann, and showed pictures of an elaborate first birthday party for the pup, complete with a banner and a table full of colorful gifts for the canine.

That infuriates Carter. “Seeing the things they did, their online persona, but then there’s someone down there rotting in the basement,” Carter said. “I can’t wrap my head around it.”

It was a lot to take in. And always has been, really.

Carter and his younger brother were the fourth and fifth kids born to their biological mother in the Huntsville area before their mother lost her parental rights. Carter recalls bouncing around from foster home to foster home – pretty much all over northern and central Alabama. The bright spot, he said, is that he and his brother were never separated.

“I took care of him a lot, changing his diapers and stuff, making sure he was eating. When he was sleeping, I’d check his chest to make sure he was breathing,” Carter said. “My little brother was like my golden egg. I just had to keep him safe. It was my main goal not to be separated ever.”

Carter was about 11 years old, and his brother about 7, when Cynthia and Richard Kelly came into their lives through a Christian adoption agency. “This is it,” he recalls thinking at the time. “It’s a big shot to get adopted. It’s really exciting, especially for a kid who grows up unfortunate. It’s a really great feeling. It was our big break.”

About halfway through his 18 months of living with his adoptive family, Carter began to get banished to the basement, he said. He thinks the first time was because he broke one of his sister’s dolls. He said there was a bed down there, but no bathroom. The light switches had been altered so he couldn’t turn them on and off. There was a door to the outside, but it was locked. There was a door leading into the house as well, but there was a motion sensor on it to alert the family if he opened it.

His least favorite food was vegetables. And that, he said, is what he had to eat in the basement. Sometimes, he said, he was given even less.

“They would say, ‘Jesus survived off bread and water, so you can too,'” he said. “It was like a torture method. They were upstairs eating pizza and Chinese, and I’d be eating bread and water.”

He said he was down there sometimes for months at a time. The worst was when the sun set. “When it got dark, it got dark,” he said. “You can hear everyone laughing or doing whatever upstairs, and you’re just stuck. I hated it. And that was when I started questioning everything.”

Ultimately, Carter was sent away from the home and was adopted by an Arizona family in 2013. At one point, about two years ago, Carter said he and his adoptive father stopped by Helena in hopes of seeing his little brother.

Carter remained in the car because he didn’t want to cause any trouble. His father spoke briefly with Richard Kelly, who told him Carter couldn’t see his brother.

Instead, Carter got only a glimpse from afar.

“I saw his face but I didn’t get to say hello,” he said. “He looked really skinny but I didn’t think nothing of it at the time.”