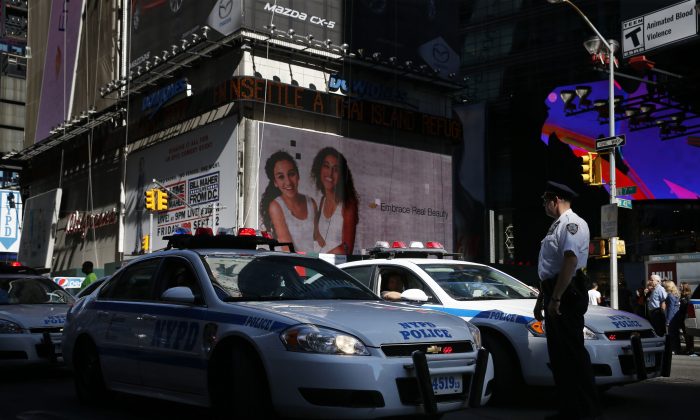 A police officer helps to park police cars in Times Square in New York on Sept. 17, 2014. Two police officers from New York have been charged with sexually assaulting a woman in an Atlantic City casino. (AP Photo/Seth Wenig)
US

Two New York City Police Department officers will face charges for the beating of a 16-year-old teenager in Brooklyn.

Officers Tyrane Isaac and David Afanador were indicted in the beating of Kareem Tribble, 16. They hit him in the face with a gun after he stopped running and raised his hands to surrender, according to the New York Post.

The two were arraigned Brooklyn Supreme Court on Wednesday.

Officers chased Tribble after they saw him allegedly looking into the window of a van in the Bedford​-Stuy​vesant​ neighborhood in August.

He tossed aside a small bag and started running when he was the two officers.

Video footage of the incident shows Tribble slowing down and putting up his hands before one of the cops hits him in the face.

After he was down on the ground, the other officer hits him in the face with his gun.

“What they did was a criminal act and a horrible thing and what’s happening to them right now is well deserved,” said Tribble attorney Amy Rameau, via the Post. “It was absolutely unwarranted. They had no reason to chase that poor child. They took a look at him and decided they were going to chase him and he got scared and ran.”

Rameau said the teen was leaving a friend’s house and didn’t commit a crime.

“My client was leaving a friend’s apartment, he committed absolutely no crime, he did absolutely nothing wrong, and these officers decided to chase him,” she said, according to NBC. “They chased him and they brutalized him.”

“You don’t get to stop anyone you feel like stopping in the streets when there’s no probable cause,” she added.

One of the officers was suspended without pay following the incident. The other was placed on modified duty.

He said Tuesday, “We believe once all the facts in this case are presented to a jury, the officers will be indicated.”