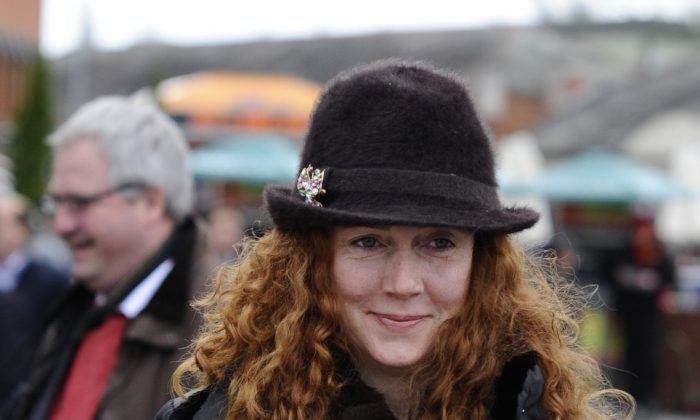 Rebekah Brooks, former chief executive of News International, arrives at Newbury racecourse in Newbury last year. The 43-year-old has been arrested as part of a police probe into the hacking of phone messages. (Alan Crowhurst/Getty Images)
US

Former head of news International Rebekah Brooks has been arrested as part of the police phone-hacking probe.

She was arrested in the early hours of Tuesday morning along with five others as part of a Metropolitan police inquiry into the phone hacking of voicemail messages.

Although they did not say whether Rebekah Brooks was one of them, the Met police in a statement confirmed that six people had been arrested on suspicion of conspiracy to pervert the course of justice, including a 43-year-old woman arrested at her home address in Oxfordshire. Mrs Brooks is 43 and lives with her husband in Oxfordshire.

The BBC, Telegraph, and Times all said that according to sources, she had been one of the six arrested, along with her husband.

The police said that the arrests were carried out after consultation with the Crown Prosecution Service.

The police inquiry, known as Operation Weeting, saw Mrs Brooks arrested last July on suspicion of conspiring to intercept communications, before being released on police bail. She has also been arrested as part of a related police operation that is probing corrupt payments to police.

The arrest of Mrs Brooks and her husband are another uncomfortable step in the phone-hacking scandal for Prime Minister David Cameron.

The latest arrests bring the total arrests in the phone-hacking related police inquiries to a total of 44.