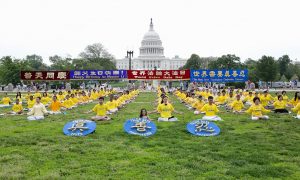 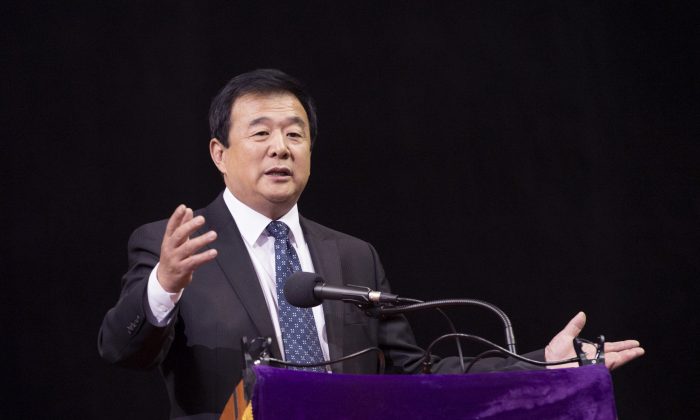 NEW YORK—The Barclays Center in Brooklyn was full on Tuesday—but the occasion wasn’t a ball game. Instead, an estimated 8,000 practitioners of Falun Gong, a Chinese spiritual practice, had traveled from around the world to participate in a large-scale experience sharing conference, known in Chinese as a Fahui.

The sharing of experiences around the practice of Falun Gong is a central component of the traditional discipline, which was introduced to China in 1992 and by the end of the decade had gained over 70 million practitioners before the Chinese Communist Party launched a brutal persecution that continues to this day.

A highlight of the day for many was the appearance of Master Li Hongzhi, the founder of the practice, who gave a speech and answered questions from his students for close to two hours before the lunch recess. Master is a common title of address for qigong masters, who were free to teach practices of mind and body cultivation, like Falun Gong, in China before 1999. Li has lived in the United States since 1997.

Yan Niulan, 70, was one of the roughly one dozen Falun Gong practitioners that addressed the group with her own personal experience on Tuesday. Wearing a blue-sequined headband and a bright white wool cardigan, she explained how she had begun practicing Falun Gong amid a serious health crisis many years ago—and how the practice helped her recover rapidly from a debilitating stroke. Yan explained how multiple bone fractures and internal bleeding were healed through persistence in the practice.

“I don’t know why, but when I watched the Falun Gong videos for the first time, I just cried,” Yan said, speaking in Chinese. She was referring to the videos of lectures that Li gave in China in the first half of the 1990s, which form the basis of the teachings of the practice. On Tuesday many practitioners discussed what they felt was the moral force of the teachings of Falun Gong, which say that the principles of the universe are truthfulness, compassion, and forbearance, and that the purpose of life is to live according to those ideals.

Since that day, Yan said, she has attempted to use as much spare time as she can muster to tell other Chinese people about the persecution of Falun Gong. This included overcoming obstacles like learning how to use a computer—something she never expected she would do—in order to make phone calls to China.

While Falun Gong was very well-known in mainland China during the 1990s, the Communist Party began a ferocious campaign to vilify and slander the practice when it began the persecution, according to the Falun Dafa Information Center.

In a similar way to how landlords, capitalists, intellectuals, and others, were once labeled, discriminated against, and persecuted during Chinese communist history, the Party also attempted to stigmatize Falun Gong in the eyes of the public, in part to make the human rights abuses inherent in the campaign easier to perpetrate.

Many of the experiences shared by Falun Gong practitioners on Tuesday discussed the ways in which they sought to overcome the obstacles in the minds of Chinese people to learning the truth about Falun Gong.

Some practitioners had come straight from China especially for this Fahui. These included Mrs. Zhang (not her real name), a peasant from outside a small town in Jilin Province. She is 71-years-old, short, and carried a beaming smile on a weather-beaten face. Mrs. Zhang is now retired, but for decades had grown and harvested corn in China. Her son, William Liu, an engineer based in Michigan, bought her a plane ticket and helped translate her thick local vernacular into standard Mandarin.

She first learned Falun Gong in 1998, at the height of its popularity and public recognition in China. “I read the book in one night and right then knew it was good,” she said, referring to Zhuan Falun, the central teachings of the practice. Mrs. Zhang explained how she would use opportunities in everyday life to encounter other Chinese and tell them about Falun Gong.

“What lovely children you have!” she said, demonstrating the manner in which she might strike up a conversation in her native town. The discussion would then turn to the nature of the Communist Party, which, Mrs. Zhang would explain, is an unjust political regime. She would then explain that Falun Gong is good and peaceful, and unfairly persecuted.