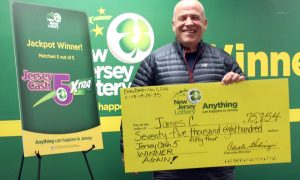 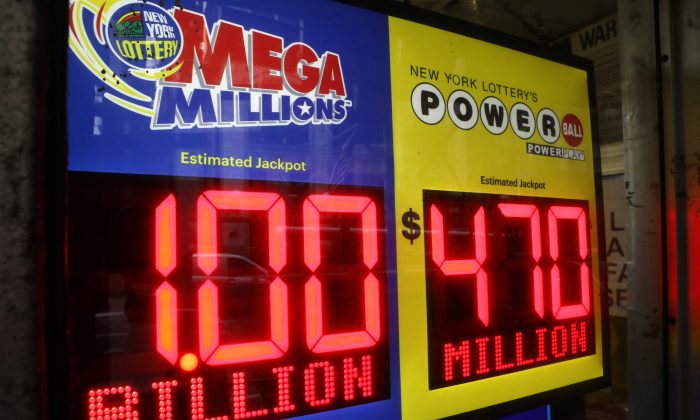 File photo of signs displaying the jackpots for Mega Millions and Powerball lottery drawings at a newsstands in Midtown Manhattan in New York, on Oct. 19, 2018. (Mike Sugar/Reuters)
US News

A Brooklyn truck driver is the sole winner of the $298.3 million Powerball jackpot that was drawn on Dec. 26.

Dave Johnson made his regular stop at the Arnold Service Station on Linden Boulevard in the East New York neighborhood of Brooklyn before going on his route, the New York State Lottery said on Jan. 25, nearly a month after he won.

“I got a call that the winning ticket was sold at the store where I buy my tickets. I went to the store and gave the ticket to the clerk to check. He scanned it and said, ‘Congratulations.’ I needed to see it for myself, so I scanned and saw it read BIG WINNER,” he said.

We congratulate David Johnson, of East New York. He is the third consecutive NY Powerball winner in 2018. He collected…

“I can’t even eat. I start and can’t finish my food. I’m happy with joy inside,” he told the lottery’s website.

The 56-year-old found a $5 bill in his back pocket and decided to play the Powerball lottery, Pix11 reported.

David Johnson from East New York is the newest #Powerball winner. He’s taking home the second largest jackpot of $298.3 million in the history of the @newyorklottery. He quit his job immediately! Coming up at 5 on @CBSNewYork find out what he plans to do with the money. pic.twitter.com/2asGp5wHVS

“He called me and said ‘Dave somebody won the Powerball at the gas station’ and I turned to him and said ‘Nah that’s not me man that’s not my luck,’ Johnson told the news outlet.

He soon realized he was the winner of the Powerball jackpot.

Johnson, a native of Jamaica who came to the United States when he was 16, said he’s going to quit his job immediately.

“Nah I ain’t gonna continue to work. I quit right away. Right away no delay,” he told Pix11.

He has opted to take the lump sum payment of $180 million. After taxes, he will take home $114 million.

After winning a Poweball jackpot of $298 million, a Brooklyn truck driver is trading his truck for a red Porsche.

“I went, got back in my car, I turned my music up and zoomed on home,” he told NBC New York. Johnson then told his family: “I’m rich! I’m rich! I’m not going to work anymore.”‘

The first purchase he said he’ll make is a red Porsche, Pix11 reported.

“New York Lottery Director Gweneth Dean noted that the Powerball jackpot win ticket sales also had a ripple effect in New York. During the 16-week roll-up jackpot roll up that began on October 31 and ended with Johnson’s big win on December 26, Aid to Education accrued more than $36 million and Lottery retailers earned $2.1 million in commissions,” according to the lottery website.

David Johnson said he was sick and was headed to work anyway when he decided to play the Powerball on Dec. 26.

The New York lottery is the most profitable in the entire United States.

Just months prior to his win, a 67-year-old New York man won $343 million in the Powerball lottery. It was the largest win in New York state history.

WOWZA! The Manhattan man who won a $343.9 million Powerball jackpot in Harlem is stepping forward to claim his prize….

“A family member gave me the numbers over 25 years ago and I faithfully play them,” Robert Bailey, the winner, told CBS NY. “I buy my tickets at three or four different stores. It was raining that day so I went to the deli to get out of the rain and I bought my ticket there.”

“I’m gonna get a house, especially for my mother. God bless her, she’s still around,” Bailey told the news outlet. “I definitely want to travel a little bit and hopefully I make some good investments that will work for me and my family.”