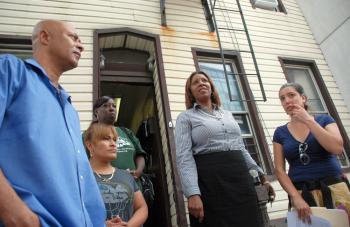 The tenants, some of who have lived in the three-story building for decades, said Tuesday at a press conference that the building has been in a dangerous condition for years, and that it has been neglected by the building's management.

“The building has not been maintained for the last seven to 10 years,” said Frank Gibbs, who lives on the first floor of the more than 100-year-old building. “[In] my apartment, the paint fell off the roof, the roof fell, there are holes in the kitchen, there are holes in the living room, there are mice, cockroaches, and rats that run rampant here—everyday.”

With nobody to fix the building and chase the rodents away, Gibbs went to buy a cat to ward off the six-inch rats.

Paulina Felipe, who lives on the top floor, has been experiencing some drizzly nights since the siding of her window fell out about four years ago. On raining days, rainwater would fall into the window and onto her bed, forcing her to move the bed whenever it rains.

On the other side of her apartment, the floors below her shower and her toilet have collapsed over the past year.

“I was sitting on the toilet, the floor below the toilet started to fall and I barely got up in time,” said Felipe in Spanish. Upon the incident, she called the management, but nobody answered.

Sam Weinberger, the building’s new manager, signed an agreement with the tenants to fix the building into a “beautiful condition” by Sept. 5. He blamed the horrible conditions on the previous manager.

The repair work first began on the second floor on Monday, home of 40-year resident Vincente Ferrer. With cracking stairs, a sinking washbasin, falling ceiling, and peeling wall, Ferrer said that nowadays the building is “awful” compared to when he first moved in.

Although the repair work has begun, the tenants, all of whom have received eviction notices, said that they do not trust Weinberger. They have joined forces with Pratt Area Community Council, a not-for-profit organization.

The residents said that the building has been illegally converted from a six-unit to an eight-unit building. Since Weinberger came into office, he has been running an illegal hostel, renting the empty units to students.

“When he [Weinberger] got here, all [of] his concerns were the hostels and taking care of the apartments where the hostel [rooms] were,” said Gibbs. “He never made this place habitable for the tenants. He should maintain and make sure that this place is habitable enough for all the tenants, not just for the hostel students that come here.”

Weinberger, however, said that one of the tenants, rather than himself, invited the hostel students over and he was not aware of it.

While most of the students were asked to leave in the past few days, the three remaining students left on Tuesday.

As the building is in foreclosure, Weinberger said that the management will definitely buy the building back.

“It’s not going to be for foreclosure—100 percent no,” Weinberger said.