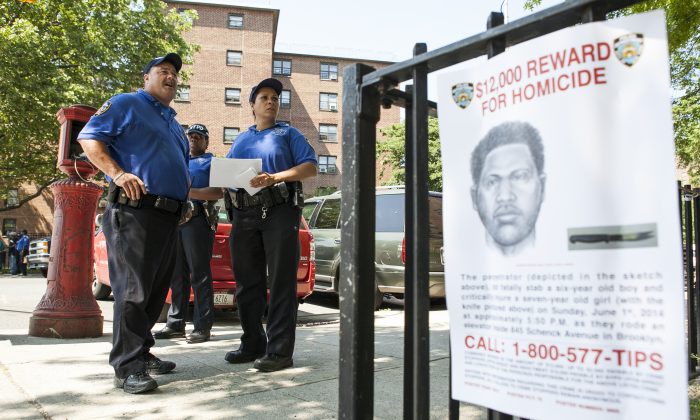 Police near a sign depicting the perpetrator of the stabbing to death of Prince Joshua Avitto, at the Boulevard Housing project in East New York on June 3, 2014. (Samira Bouaou/Epoch Times)
New York

NEW YORK—The arrest after a massive search for a man who murdered a 6-year-old boy and seriously wounded a 7-year-old girl is imminent, according to sources familiar with the case. Police and community safety organizations have swept the area for days in search of information about the attacker.

A police sketch of the man, described as an approximately six-foot tall Black, heavy-set male, has been plastered throughout the neighborhood. Late Wednesday afternoon, sources with two community safety organizations said that police had found the killer’s DNA on the murder weapon—a cheap, kitchen-grade steak knife.

“We decided to pull back because the NYPD said they got DNA,” said Shanduke McPhatter, who heads up the group Gangstas Making Astronomical Community Changes (GMACC). He said police also have a photograph of the man, though he couldn’t confirm how the photo was obtained.

His group has been combing through the neighborhood in the wee hours of the night since Sunday. Since their main goal is to ensure that the wrong person isn’t arrested, he said they won’t continue in order to avoid impeding the police investigation.

Though an NYPD spokesperson couldn’t confirm that DNA had been recovered, McPhatter said he and his group have been in close touch with authorities and they were the source of his information.

Another community group, Man Up, also said on Wednesday that police told them of the existence of DNA evidence. The group’s members, who are a well-known presence in the area, provide bereavement counseling to community members and engage with high-risk youth. They also sometimes get involved in diffusing conflicts before they escalate.

James Peterson, assistant executive director of Man Up, said they are never directly involved in any arrests or capture of criminals. Speaking at the group’s headquarters in East New York on Wednesday evening, Peterson said he believes an arrest is now imminent. They work closely with the NYPD

“The arrest is any minute once they got a tag on you like that,” said Peterson.