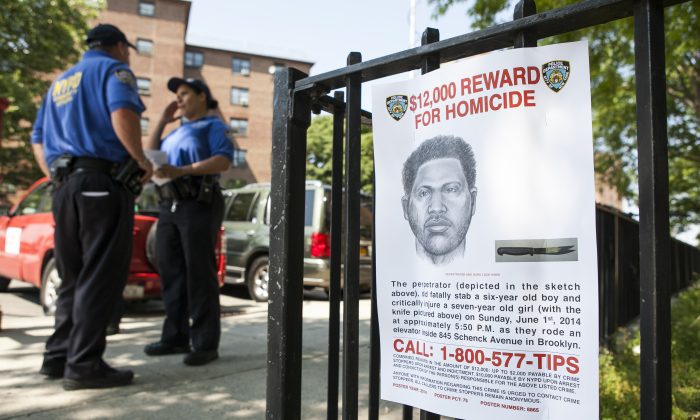 A sign depicting the perpetrator of the stabbing to death of Prince Joshua Avitto, at the Boulevard Housing project in East New York on June 3, 2014. (Samira Bouaou/Epoch Times)
New York

UPDATE: This story was updated with details from Thursday night’s arraignment, as well as additional reporting from The Associated Press.

NEW YORK—The man accused of stabbing two children, one fatally, was arraigned Thursday at the Central Court Building in downtown Brooklyn. Daniel St. Hubert, 27, was arrested on Wednesday night as the prime suspect in the attack of Prince Joshua Avitto, 6, and Mikayla Capers, 7. The children were stabbed repeatedly in an elevator in their building on Sunday.

The funeral for Avitto, who did not survive, was also scheduled for Friday morning. Capers remains in the hospital recovering from her wounds.

The NYPD has also said St. Hubert is a person of interest in the similar stabbing death of 18-year-old Tanaya Copeland. Copeland was murdered just a few blocks away after she was stabbed multiple times. The knife used to kill her, found nearby, was similar to the one found at the scene where the children were attacked.

St. Hubert hasn’t formally been charged in this, or another stabbing at a Manhattan subway platform for which he is suspected as investigators are still testing forensic evidence, police said.

St. Hubert, who was released from prison on May 23 following a five-year sentence for attempted murder and assault, was in custody and unavailable for comment. He has not made any statements implicating himself and has retained a lawyer, police said. The name of the lawyer was not immediately available.

St. Hubert was also charged with making graffiti after police said officers witnessed him scrawling on a stop sign shortly before his arrest Wednesday night near his mother’s home, police said.

Court records show St. Hubert was arrested in May 2009 after punching his mother in the face, choking her with an electrical cord and stealing her car. He eventually pleaded guilty in July 2012 and served almost three years of his sentence in city jail or in the custody of the department of mental hygiene, according to court records.

On Thursday, Mayor Bill de Blasio said that there was not yet “sufficient information” that Hubert is the suspect they are seeking, though he said it’s “likely.”

“We all think there’s a strong likelihood, but there is not enough evidence yet to confirm that we can move forward with that potential prosecution,” said de Blasio during an unrelated event at an elementary school.

The mayor also said that police and prosecutors are looking into other possible cases that Hubert could have been involved in. One of them was the violent stabbing of a homeless man on a train platform in Manhattan last week.

St. Hubert is seen on surveillance video near the Manhattan subway stop where a man was stabbed on a platform Wednesday, said Stephen Davis, the police department’s top spokesman.

“I wouldn’t be surprised if there was evidence linking him to one or more crimes,” said de Blasio.

On Wednesday night, the mayor held a high-profile press conference with NYPD top brass to reveal Hubert’s identity, which was found through the examination of forensic evidence from the crime scene where the children were attacked. The mayor and the police commissioner implored the public to call 911 and help find Hubert.

Within less than an hour of the announcement of Hubert’s identity, police had located and arrested Hubert.

Investigators are now reviewing all stabbings citywide that have occurred since St. Hubert’s release. Davis said it appeared St. Hubert was issued a summons for public urination in Brooklyn at about 1:30 a.m. Wednesday, before he was identified as a suspect in Sunday’s attack.

St. Hubert didn’t put up any resistance during his arrest and was angrily ranting to himself in a holding cell late Wednesday night, Davis said. It wasn’t immediately clear what he was ranting about or if he has a history of mental illness, Davis said.

Court records show St. Hubert was found unfit for trial three of the four times he was ordered to undergo psychiatric evaluations following his arrest for assaulting his mother. He also was convicted of assaulting a correction officer in jail, the records show.

The mayor also used the opportunity to talk about what he has dubbed the “de facto mental health system” that exists within prisons locally and nationally. Hubert has a criminal record and was recently released from a state correctional facility.

“There are also a lot of people in the prison system or jails who do not have mental illness,” said de Blasio, “But there’s an embarrassing percentage who do, who should’ve in many cases been given treatment; that might’ve been a better alternative for them.”

The case of Hubert comes just days after the mayor announced the formation of a high-level task force to reform how New York City’s corrections system treats the mentally ill. They will be focused on the approximately 40 percent of those incarcerated who have mental health issues.

The task force has been called “unprecedented” by a member of its expert advisory board.