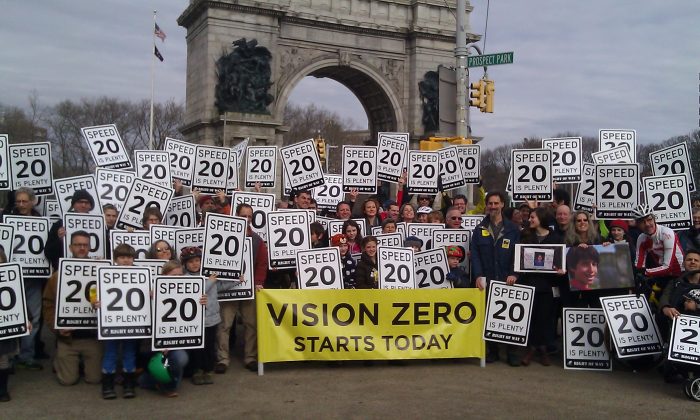 NEW YORK—Nearly a hundred Brooklyn residents showed up at Prospect Park on a day’s notice to show support for a state bill that would allow New York City to reduce the speed limit throughout the city.

The city’s speed limit is currently 30 mph by state law. Assemblyman Daniel O’Donnell introduced a bill last month to lower it to 20 mph “except where a different speed is determined appropriate and is indicated by an official sign,” he said. The bill is in review in both the state Senate and Assembly.

Community members held “20 is Plenty” signs, joined by Council member Brad Lander. Other people and cyclists passing by joined in a well.

A nearby resident, Kate Steinberg, said the outpour of support was symbolic of the Brooklyn community being at the forefront of pushing for traffic safety.

In the last year, 18 children died in vehicle-related accidents. Steinberg’s close friends lost their 12-year-old son Sammy Cohen Eckstein when the driver of a vsn struck and killed him last October.

“They went through something devastatingly tragic people can’t even comprehend,” Steinberg said. Her own son had been best friends with Sammy Cohen Eckstein since he was 4 years old, and the experience drew her and others to support a movement to create safer streets.

“It raised awareness—it certainly brought my attention to things that are more dangerous than I realized,” Steinberg said.

Event organizer Keegan Stephan of Right of Way said city officials have been active in pursuing Vision Zero and as of late have been very receptive to the traffic safety concerns of communities.

On issues like lowering the speed limit, however, they “have run into impediments with the state laws,” Stephan said.

State law currently allows the city to lower speed limits to 15–24 mph within a quarter mile of schools. According to WNYC, that’s 55 percent of the city’s streets.

Organizer Hilda Cohen, founder of Make Brooklyn Safe, said one of the concerns raised is the need for more enforcement. But with more education and awareness of what the speed limit is, Cohen said, enforcement won’t be a burden. “Most drivers don’t drive trying to break the speed limit,” Cohen said.

Cohen travels all over the city by bike and has done so since 1998. It’s gotten easier over the years, but if the streets were safer, more people would be able to do so, she said. “And lowering the speed limit doesn’t cost the state anything,” Cohen said.

In addition to lowering speed limits, some community boards have asked for cameras to be installed at the dangerous intersections they’ve identified for the DOT recently. But not all of the requests can be accommodated.

The state has allowed the city 20 cameras, 6 of which are in place. When the speeders are photographed going 10 mph over the limit $50-tickets are issued to the registered car owner.

NYC Department of Transportation last Friday said that in the two weeks the cameras have been in place near schools, 900 tickets have already been issued.

Mayor Bill de Blasio has said he plans to push for more cameras as part of his Vision Zero campaign. On Friday on Hot 97 radio he said 20 cameras was not enough.