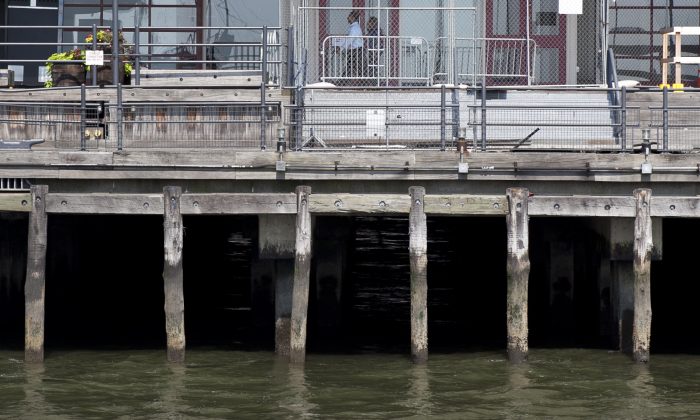 NEW YORK—The problem of degrading wooden piles that hold up piers throughout the city has a curious potential solution: eco-friendly concrete. An Israeli company, ECOncrete, has developed and is testing a system of specialty concrete casings that both support the piles and piers, as well as draw in marine life in the naturally occurring habitat.

As the quality of the water in New York Harbor has gradually improved in recent years, marine life has returned. But the more traditional option of encasing pilings that are decomposing or being eaten away by marine life with smooth concrete or fiberglass has introduced the problem of invasive species.

ECOncrete’s textured casing, now in the process of being patented, gives marine life in the vicinity many nooks and crannies to work their way into, inhabit, and thrive in. In the case of marine life like barnacles, their presence can also make the pilings stronger.

Perkol-Finkel’s company has several other types of projects in the New York City area, including at Governors Island and the Brooklyn Navy Yard. Its newest pilot project at Brooklyn Bridge Park’s Pier 6 is the first place in New York where they’ve tested the pile casings.

The casings were installed in June, and their impact will be inspected at the end of September.