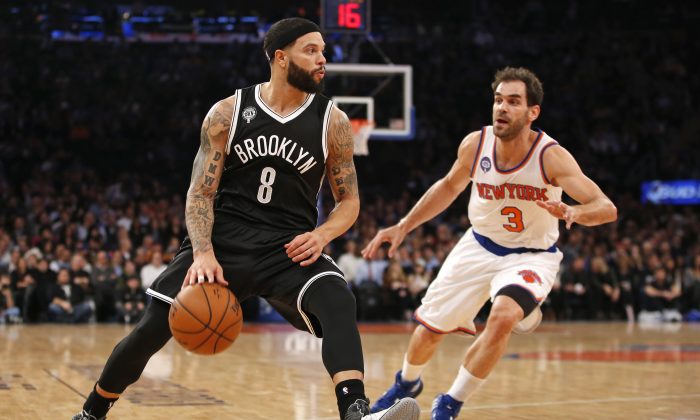 The Brooklyn Nets are preparing for their next game as the news and trade rumors ramp up.

The Nets have officially decided to break up their core and have placed Deron Williams, Brook Lopez, and Joe Johnson on the trading block, according to ESPN.

The Nets are struggling at 8-11, and all three veterans are having relatively poor seasons.

Because of the high salaries for all three of these players, they’d likely be moved in separate deals.

The report noted the Nets still want to win now and are looking for good value.

“Sources insist that the Nets haven’t abandoned their recent ‘win-now mentality’ and aren’t merely looking to dump salary. Brooklyn’s hope, sources said, is eventually to construct a deal or two that bring back sufficient talent that enables the Nets remain a playoff team,” it added.

Williams, 30, has two years remaining on a five-year, $98 million deal. He’s due $21 million next season and $22.3 million in the final season of his contract, although he has a player option, so he could be a free agent in the summer of 2016.

Lopez, 26, has one year left on his contract. He’s expected to exercise the player option for next season worth $16.7 because of lingering injuries.

Johnson, 33, also has one year left on his contract besides this season, and is set to make $24.9 million next season.

The trio is the highest-paid trio in the league this season at $58.7 million combined.

With the news that the players are on the block, potential trade scenarios began emerging.

One such scenario is Johnson and Mirza Teletovic to the Charlotte Hornets for Lance Stephenson, Marvin Williams, and Michael Kidd-Gilchrist.

“The first caveat here is that Michael Jordan’s Charlotte Hornets can’t trade Stephenson or Williams until Dec. 15 because acquired free agents can’t be dealt until that date or three months after their contracts were signed, whichever comes first. The second caveat is that the Hornets would have to be willing to surrender relatively inexpensive pieces of their future—albeit ones with very clear limitations—in exchange for the perimeter shooting they desperately need,” Bleacher Report noted.

“Stephenson has been a bust in Charlotte because of his ball-stopping ways and broken perimeter shot. But the Brooklyn native and high school legend would immediately be a Barclays Center darling. Johnson will definitely stop the ball, but he’s built a career on knowing what to do with it when he does. Teletovic is the real steal here, and the piece Brooklyn would least like to surrender. But if you’re trying to move a one-dimensional scoring guard making $23 million per season, you’re going to need a quality sweetener.”

Other possible trades include Lopez to the Lakers for Jeremy Lin and Julius Randle and Williams to the Pistons along with Mason Plumlee for Greg Monroe, Brandon Jennings, Kentavious Caldwell-Pope, Joel Anthony, and a protected first-round pick.

The biggest scenario named is a New York blockbuster–the Knicks would get Williams, Lopez, and Kevin Garnett while the Nets would get Amare Stoudemire, Andrea Bargnani, Iman Shumpert, and Shane Larkin.

Any scenario will be tough to pull off, needing, as noted above, some type of sweetener like Teletovic.

“If we’re just looking at the Johnson/Lopez/Williams trio, none of them is all that irresistible at their price tags,” said John Schuhmann of NBA.com. “Johnson has the best combination of skills and durability, and the Clippers and Hawks (ironically) are examples of teams that could use his size and scoring on the wing, but good luck finding a workable trade with that contract.”

But others said Lopez is a good piece. “At age 26, and with some significant injuries behind him, Brook Lopez could be a game changer for someone,” said Simon Legg of NBA.com. “There’s elements of his game that need improvement, like rebounding and defense but if a team with the right defensive system could poach him, who’s to say he wouldn’t impact them in a huge way?”

While the Nets have Williams, Lopez, and Johnson on the block, it’s presumed that many other players are tradeable as well.

If the Nets can convince Garnett to accept the trade, one being proposed is a swap for David Lee of the Golden State Warriors.

“For Brooklyn, the 31-year-old Lee is younger, more productive and, at this point, more talented than the 38-year-old Garnett,” Bleacher Report said.

“The Nets badly need offense, and Lee is more than capable of providing a spark as a scorer and a setup man.”

Lee is known for his consistent double-doubles and also has good court vision for a big man.

“But the real draw for Golden State is Garnett’s expiring $12 million contract. That has more value than anything he or Lee can provide on the court,” Bleacher noted.

Ian Thomsen of NBA.com noted that for a contender trying to win right now, Garnett is the most attractive Net.

“The best (and only?) move may be to package some of the younger talent for another veteran and therefore go all in with this old roster,” he said. “It makes sense to make a run at the East this year while the conference is so weak, but it also means the risk of digging an even deeper hole.”