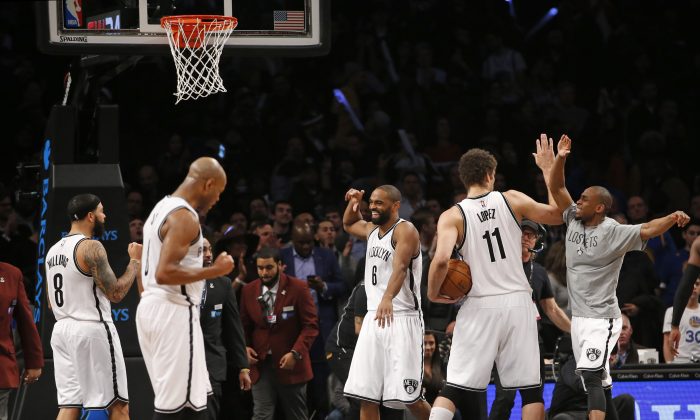 From left, Brooklyn Nets guards Deron Williams, (8), Jarrett Jack (0), and Alan Anderson(6), celebrate along with Nets center Brook Lopez (11) and forward Thaddeus Young, in tee shirt, after they defeated the Golden State Warriors in an NBA basketball game at the Barclays Center, Monday, March 2, 2015, in New York. Jack hit a jumper with 1.1 seconds remaining on the clock to give the Nets a win. (AP Photo/Kathy Willens)
NBA

Six teams are battling for two playoff spots in the NBA’s Eastern Conference, but one team has risen above the rest since the All-Star break.

The Brooklyn Nets are beating opponents with their new small-ball lineups, similar to last season with four shooters and one big man.

Brook Lopez or Mason Plumlee are on the floor at almost all times, but surrounding them are four players capable of shooting three-pointers, creating a potent attack that has propelled the Nets to a 4–2 record since the break, including a 110–108 win over the powerful Golden State Warriors on Monday night.

Coach Lionel Hollins has been mostly playing Thaddeus Young or Joe Johnson at the power forward position. Both are big enough to bang with bigger fours while creating mismatches on the offensive end due to their shooting ability and quickness. Young, acquired at the trade deadline for Kevin Garnett, made two huge three-pointers in the fourth quarter against Golden State to help his team to the win.

Hollins’s willingness to adjust the team’s playing style led him back to last season, when Jason Kidd often employed Paul Pierce at the four. Another effect of playing Young or Johnson at power forward—opening up another position to fill for guards and smaller forwards, leading to the emergence of young Markel Brown, and increased playing time for Alan Anderson, Deron Williams, and Jarrett Jack.

“It feels different. It’s a lot more fun to get out and be able to run, for the court to be spread,” Williams told North Jersey.

“It just opens up a lot of things for everybody. And for me as a point guard, it’s definitely a luxury.”

Despite spreading the floor more, the Nets are not taking more three-pointers than before the break. But out of about 20.5 three-pointers a game, they’re making 7.5, up from 6.6. The team is also getting much better shots overall, including more dunks and layups, as their shooting percentage has climbed to 41 percent from 36.3 percent.

Although the Nets are scoring more, the team has actually been assisting on fewer baskets than before. On the other hand, even though the lineups are smaller, the Nets are getting rebounding contributions from everyone, including Johnson and Brown.

The Nets are still far from a guarantee for one of the final East playoff spots, but their recent play has put them at the top of the six teams in contention. Detroit has a tough schedule remaining so could be counted out, Boston seems unlikely to continue its push, and Charlotte hasn’t been playing well lately. It could come down to the Nets, the Heat, and the Pacers for the last two spots. In any case, expect to see Brooklyn in the playoffs.