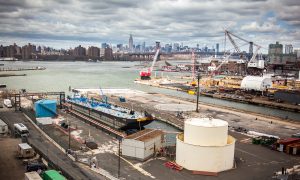 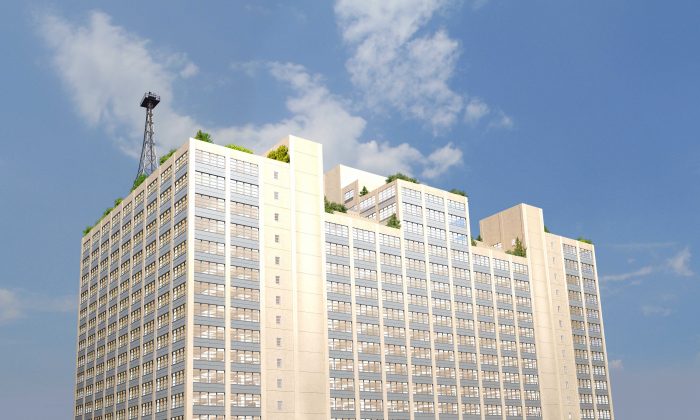 NEW YORK—Creative companies are seeking space at the Brooklyn Navy Yard (BNY) faster than it can be developed.

The 300-yard industrial park was once the nation’s premiere naval industrial facility, employing 70,000 people at its peak. Jobs dwindled after World War II, and eventually the yard was taken over by the city.

In recent decades, the industrial sector had all but left the city, but now creative companies are booming in the borough of Brooklyn and BNY has been a crucial anchor to the growth.

In the next five years, the yard will add 5,000 new jobs. “That’s as many jobs as we added in 40 years,” said David Ehrenberg, CEO and president of Brooklyn Navy Yard Development Corporation (BNYDC). “We’re building on a momentum that has been developed here.”

BNYDC, the mission-driven entity that runs the yard, is not your traditional landlord. Rents are cheaper, leases are more flexible, and the space available can be sliced up any way you need it.

That sort of real estate is close to impossible to find in the city, much less nested between DUMBO and Williamsburg on the waterfront, but it is vital for the burgeoning sector of creative manufacturing.

Most companies there are design and tech, mixed with every other sector. One might require 10,000 square-feet in one year, and two or three floors a few years later. The yard gives them the security of knowing they can do that.

There are currently over 300 businesses with over 7,000 permanent employees, and BNYDC expects to more than double that in the next five to seven years through three big redevelopment projects.

The currently available space is at about 100 percent occupancy already, but BNYDC still gets six to eight calls a day from companies that want to lease immediately, Ehrenberg said.

BNYDC’s primary mission is to grow jobs. It has an employment center that hosts weekly information sessions in addition to job training sessions and taking walk-ins Monday–Thursday.

A quarter of the employees were local hires, and BNYDC is working on strengthening the program to increase local hiring.

Job creation—rather than credit—is also the biggest priority when selecting a tenant, which was unique and a fun surprise, said Michael Shenot, a managing director with Jones Lang LaSalle (JLL). JLL is the leasing broker for premier space at BNY’s Building 77.

“It was very clear the dynamic change since the financial crisis … it really has changed to an access to talent market,” Shenot said. “Many of them [companies] are located in Brooklyn exactly because of that. Brooklyn is where the creative workforce of New York is starting to locate.”

Building 77 is the yard’s largest project to date. The 1 million square-foot building is 15 floors plus a 20,000-square-foot, rooftop terrace with sweeping views of the Manhattan skyline.

Building 77, windowless for its 11 lower floors, was once a warehouse. The top four floors housed offices for the U.S. Navy.

The top two floors are being marketed together for a marquee tenant.

Another four floors in Building 77 are already spoken for, as BNYDC is reserving the space for existing tenants who will or might need to expand.

Four new small businesses signed leases for this year. Two existing tenants are expanding, and 42 tenants renewed their leases this year. The remaining nine floors at Building 77 are available.

Admiral’s Row will have a grocery store, retail space, an office/community facility, and light industrial space above ground. BNYDC put out two requests for proposals that fell through before, but the third and current one includes an additional nearby site for development. It expects to name a developer soon.

The Green Manufacturing Center is a former machine shop building. The redevelopment will be done in about four months. Two wings are leased and the third is in talks. In total, it will create 800 jobs.