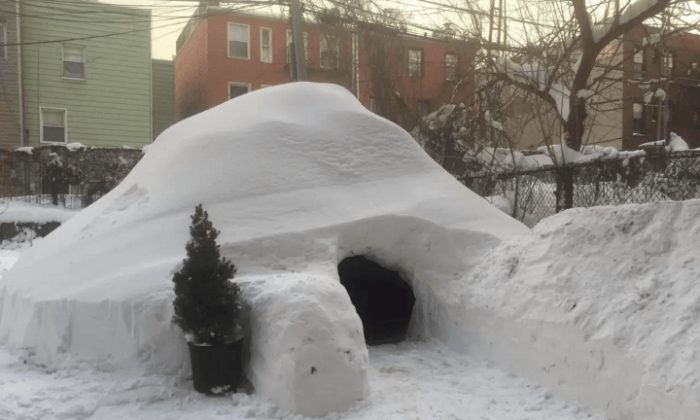 'Hand-crafted, and built using only natural elements'
By Jack Phillips

An intrepid Brooklyn man tried to use the several feet of snow that fell in New York City over the weekend to his advantage by building an igloo before listing it on Airbnb.

The snarky listing is for a “Boutique Winter Igloo,” available for an affordable $200 per night.

“Dripping with ingenuity and alt-lifestyle aura lays the Snopocalypse of 2016’s most desirable getaway. Hand-crafted, and built using only natural elements – we’re offering the experience of a life time in this chic dome-style bungalow for you and bae,” the post reads.

The igloo post was promptly taken down. However, DNAInfo’s New York bureau caught up with the builder, 28-year-old Patrick Horton.

“Got shut down by @Airbnb for not meeting occupancy standards. Though they were nice enough to tell us that it looked very well constructed,” he tweeted.

“I had no idea people liked Igloos this much,” he added, responding to the favorable reactions of people after media outlets like Distractify and the Daily Mail covered it.

“We are happy to see that you guys are staying busy and having fun during Blizpocalypse,” a Airbnb spokesperson told DNAInfo. “Unfortunately, your igloo, while very well constructed, has failed to meet our occupancy standards and has been removed from search results.”

“Be sure to pick a place with running water, electricity, and a roof that doesn’t melt.”