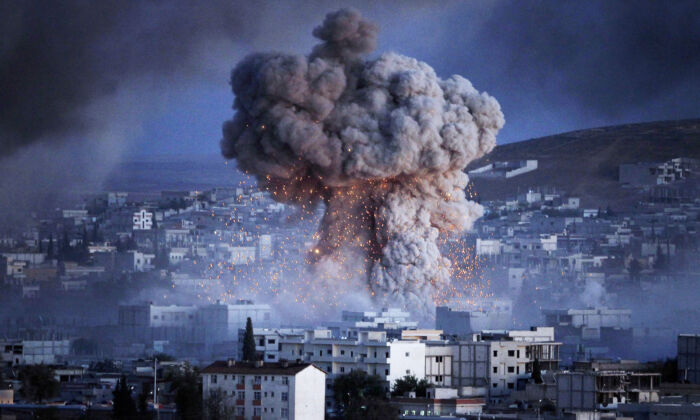 File photo showing an explosion in the Syrian city of Kobani during a reported suicide car bomb attack by the ISIS terrorists on Oct. 20, 2014. (Gokhan Sahin/Getty Images)
Crime and Incidents

A Brooklyn man originally from Kazakhstan has been indicted on terrorism charges after allegedly having been a sniper and weapons trainer for ISIS and once boasting he supported “the worst terrorist organization in the world.”

Department of Justice officials announced on Wednesday, Sept. 4 that a five-count indictment had been filed in federal court in Brooklyn the previous day charging 43-year-old Ruslan Maratovich Asainov with terrorism-related crimes.

Asainov, a naturalized U.S. citizen, spent from 1998 to 2013 living in Brooklyn before flying to Turkey in December 2013 and making his way into Syria, where he became a sniper for ISIS, a criminal complaint said. He rose through the ranks and became an “emir” in the terror group.

Prosecutors said he also tried to recruit another individual to travel from the United States to Syria to fight for ISIS. According to a complaint unsealed in Brooklyn federal court in July and cited by Fox News, Asainov allegedly tried to entice an informant working with the NYPD’s intelligence division to join ISIS, telling the informant he would help him find a job, housing, food and $50 a month.

Prosecutors said that in March 2015, Asainov asked an informant to send him around $2,800 to buy a scope for his rifle. Asainov allegedly then sent the informant photographs of himself holding an assault rifle fitted with a scope and later messaged someone boasting about the ruthlessness of the terror group and expressing his wish to die on the battlefield.

“Asainov traveled overseas, joined ISIS, and became a fighter and a sniper for the terrorist organization,” said Assistant Attorney General John C. Demers in an earlier statement. “He was ultimately detained overseas, turned over to the FBI, and will now face justice in an American courtroom.”

Prosecutors said he will be arraigned at a later date.

If convicted, Asainov faces a maximum sentence of life in prison.

Maryland Man Accused of ISIS-Inspired Plot to Cause ‘Catastrophic Damage’

The story follows the case of a Maryland man accused of plotting an ISIS-inspired terror attack at a tourist site near Washington, who was recently indicted on a terrorism-related charge.

In a statement issued on Wednesday, Aug. 28, officials said 28-year-old Rondell Henry of Germantown was indicted on federal charges of attempting interstate transportation of a stolen vehicle and attempting to provide material support to ISIS.

Henry moved to the United States from Trinidad and Tobago 11 years ago, The Associated Press reported, noting that he is now a naturalized citizen.

Court papers cited by Reuters say that in March, Henry “walked off his job in Germantown, Maryland, in the middle of the day, determined to walk down the extremist path.”

Assistant Attorney General for National Security John C. Demers stated in the DOJ press release that “the defendant, allegedly inspired by ISIS and its violent ideology, stole a vehicle as part of his plan to kill and injure innocent pedestrians.”

Desire to Cause ‘Catastrophic Damage’

Henry is accused of stealing a U-Haul van in Alexandria, Virginia, in March and driving it to Maryland with the intention of using the vehicle as an improvised weapon.

“Recognizing that his older four-door sedan would not cause the catastrophic damage that he desired, the defendant drove around the Washington, D.C., metropolitan area looking for a larger vehicle to steal,” Reuters reported, citing court documents.

Henry reportedly told investigators he planned to carry out an attack similar to one in France in 2016, authorities said. In that incident, the attacker drove a truck into crowds celebrating Bastille Day, killing 86 people.

Assistant U.S. Attorney Thomas Windom said during an April 9 detention hearing that Henry intended to kill as many “disbelievers” as possible.