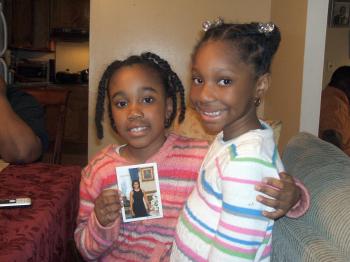 Jada Atherley, 8, of Brooklyn NY holds a photo she received from First Lady Michelle Obama. ()
US

Jada Atherley, 8, wrote to the White House last month asking how the Obama girls, Malia and Sasha, were adapting to their new friends, new school, their homework, and living in the White House.

Brooklyn-based Jada has been the talk of the school at P.S. 114, sharing the words of Mrs. Obama with her classmates. She said getting the letter was “life-changing,” especially after one of her friends had failed to receive a reply from a letter she sent to President Bush.

Mrs. Obama's letter encourages Jada to talk with her family or teacher about ways to help in her community. Jada said: “I could pick up garbage that people put on the floor, because I don’t want people around the whole wide world to litter.”

Given the chance to go to the White House, Jada said she would most like to see the puppy. But if she bumped into Obama, congratulations would be in order.

“The thing that's most important is that we have our first African-American president,” Jada said.

For now, it's back to her favorite subjects of reading and math. But the photo Michelle Obama sent her will be a treasured reminder.

“I am going to frame it and never ever forget it.”