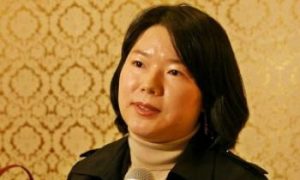 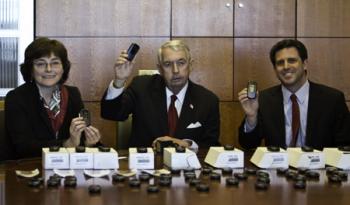 District Attorney Charles Hynes and members of his staff were present to receive the delivery from Verizon Public Relations manager, David Samberg.

Hynes stated that the assistance from Verizon has been immeasurable. “This attorney office is grateful to corporations who come in and help us provide service to the community, and especially Verizon who has been dealing with us and helping us with the cell phone donations for about 15 years since this program began.”

The cell phones are refurbished phones from the Verizon HopeLine program, an endeavor that collects no-longer-used wireless phones from across the country.

Samberg explained Verizon’s philosophy of using ‘”the technology that we build and that we sell … in the way to help the community and the wireless phone … was such a great tool for emergencies, [and] for safety.”

“So we thought, let’s put these phones in the hands of people who need [them] … in domestic violence and women who were in the situation, who made the stance,” said Samberg.

The phones are not just 911 phones. Each cell phone comes with free 3,000 minutes for the year. Verizon will add another 3,000 minutes at start of the second year. “[There] are tools for these women to rebuild their lives,” said Samberg.

Samberg explained that the phone donation program “is possible because people recycle their cell phones.” “If you have old phones lying around the house, you should bring those phones to a Verizon Wireless store and just drop them into the recycled bin. By doing that simple act, you are making donations like this possible,” said Samberg.

The phone donation gesture touched Wanda Lucibello, chief of Special Victims Division, of the district attorneys office. “Today’s event is very meaningful because it is a great example of a corporation working closely with government and working closely with not-for-profits. … You have a corporation saying we like to have a hand in helping to protect victims of domestic violence,” said Lucibello.

Lucibello explained the rationale of providing victims of domestic violence with free cell phones. The donated telephones will “allow victims of abuse to stay connected with job possibilities, with housing issues if they are relocating from danger to safety, being able to keep track of their kids, all in a way that is discreet and separate, and apart from the batterer,” said Lucibello.

The donated Verizon phones will enable a discreet way for victims of domestic violence to keep safe, to connect with services, and to be supported.

Lucibello explained the process of how domestic victims are offered the cell phones. It starts after an arrest is made, when the victim comes to the district attorneys office to meet with the prosecutor and to iron out the charges and the criminal case.