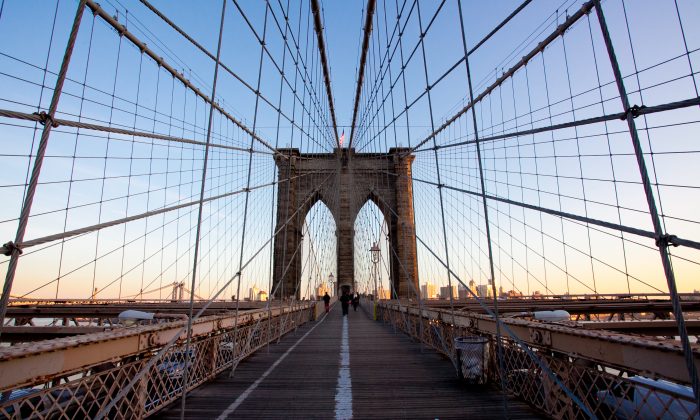 NEW YORK— The Brooklyn Bridge turns 130 years old on Friday, but the celebration will never outdo the May 24, 1883 celebration.

The New York Times described it as, “the greatest gala day in the history of that moral suburb,” referring to Brooklyn. Fireworks lit up the sky for over an hour, music filled the air, and celebratory cannon fire rang out when President Chester Arthur and New York Governor Grover Cleveland reached the Manhattan side, according to the History Channel.

Here are 5 facts about the Brooklyn Bridge:
1. The Brooklyn Bridge was the first bridge to be constructed fully of steel. At the time it was called “the metal of the future.” John A. Roebling, who designed the bridge, used steel cables from his own company to suspend the bridge.

2. John Roebling was the first fatality from the Brooklyn Bridge construction. His foot was crushed between a few pilings and a boat while taking a compass reading. His toes were amputated and within a few weeks he died of tetanus.

4. A trip across the Brooklyn Bridge is free today, and more than 120,000 vehicles, 4,000 pedestrians, and 3,100 bicyclists take advantage every day, according to figures from the Department of Transportation. When the bridge first opened it cost a penny to cross by foot, five cents for a horse and rider, and 10 cents for a horse and wagon.

5. The Brooklyn Bridge was the longest suspension bridge in the world at the time, connecting Brooklyn and Manhattan, which were individual cities at the time of its opening. Brooklyn became a part of New York City on January 1, 1898.