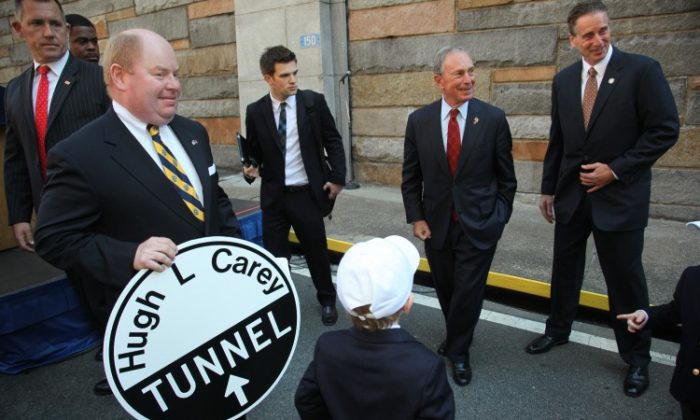 The name was changed in honor of former Gov. Hugh Carey, whose epithet is “the man who saved New York.”

After serving seven terms as a congressman from Brooklyn, Carey served two terms as governor from 1975 to 1982, during New York City’s economic crisis when the city nearly declared bankruptcy.

He is remembered for his effective handling of the financial crisis, and the building of Battery Park City, the Jacob K. Javitz Convention Center, and the South Street Seaport. Carey passed away last year at age 92.

The Brooklyn-Battery Tunnel was chosen because it connects southern Brooklyn to Lower Manhattan, “which is very fitting, Governor Carey was a son of Brooklyn,” Lt. Gov. Robert J. Duffy said.

“Thousands of New Yorkers drive through this tunnel everyday. They’re thinking of work, home, school, their to-do list for that day, and from this day forward, if only for a moment, they’ll also think of Hugh Carey,” Mayor Michael Bloomberg said.

Bloomberg also noted how Carey was the first governor to develop a capital plan for the MTA, “at a time when our subway system was literally falling apart. The New York standing today is literally a testament to Governor Carey’s foresight.”

“We want to make sure his name is not just remembered by civic leaders and historians, but millions of New Yorkers who will hear his name on a traffic report—hopefully people won’t be stuck in traffic and curse his name.”