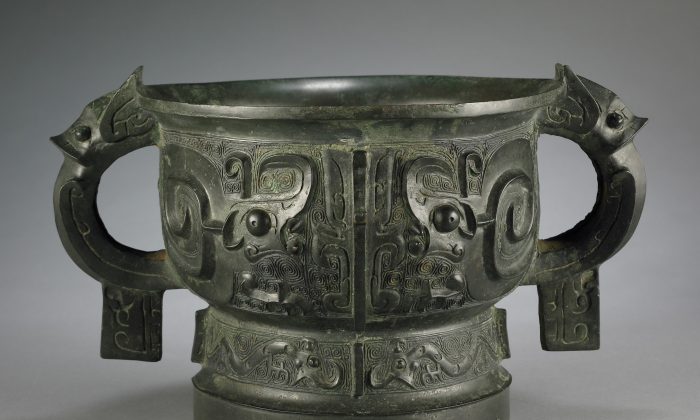 By Richard A. Pegg, PhD

Supported by a tall ring foot, the deep and upright body of this gui, a form of ritual vessel, rises to a flared mouth.  Two loop handles emerge from the sides of the vessel, with a rectangular pendant at the bottom.

This gui was created during the reigns of King Wu and King Cheng, the first two Zhou period (1027-221 BCE) kings. The high relief dragons are distinctive and characteristic.

During the Shang period (1580–1027 BCE), which preceded the Zhou, ancestor worship was formalized. The royal family obtained their legitimacy and power over destiny through a complex system of inquiry and supplication to the spirits via ancestor worship.

At some point bronze vessels containing offerings of food, like this gui, and drink became part of the ritual practice of the Shang king-shaman.  These bronze vessels were also placed in tombs, functioning as important burial goods and ensuring the continued power and authority of the royal heirs.

During the Western Zhou, which immediately followed the Shang, there was an increase in the popularity of rounded, unflanged vessel shapes, with flowing interlace patterns ignoring mold lines and mold construction.

One of the most significant early creatures decorating Chinese bronzes was the dragon, beginning as a kind of proto-dragon sometimes referred to as a kui-dragon, with an endless array of variation.

On this gui, there appears a pair of dragons each with a raised spine and coiled body, a distinctive Western Zhou period variety, that are positioned face-to-face to resemble a taotie mask construct. The leiwen, or thunder, patterns are the rounded or squared spirals of background decoration seen throughout many Chinese bronzes.

It is likely that these thunder patterns are depictions of the qi energy of clouds rushing together and retracting to make rumbling thunder. They may also represent qi energy in general and serve the purpose of visually making manifest the life energy and movement of the animals depicted. Quite often these thunder patterns surround the animals, and in some cases they texture the animals themselves, providing animation.

Here, the vessel’s body is decorated with two pairs of coiled dragons in high relief. Each pair is juxtaposed mouth-to-mouth and separated by a flange. The body of each dragon is a large smooth, flat coil with a high-relief ridge down the center. Round pupils are set in the eyes, and the open mouths display two prominent teeth protruding from the lower and upper jaws. The upper lip extends up and curls backward, while the horn goes upward and curls back around. One foreleg emerges from each lower branch of the body and stretches forward below the head.

Two, much smaller dragons decorate each side of the ring foot. The bottle-shaped horns may be related to the so-called “diamond-back dragons.”  Unlike the coiled versions on the bowl, these dragons are fully outstretched, with five scales on the body and two claws below the body. Their mouths open downward, revealing two fangs.

On top of each handle is an animal head, with the ears and forehead protruding into and interrupting the rim of the mouth. The details of the handle are exaggerated in high relief, just like the dragon bodies. On the sides of the handle and pendant are intaglio lines in shapes similar to the claws and tails. The vessel is a dark black-grey with extensive areas of dark green corrosion on the interior surface.

Bronze is an alloy of copper, tin and lead or zinc. In Bronze Age societies, hammering techniques, lost-wax casting and mold casting methods were developed for the manufacture of bronze objects.

China primarily utilized the relatively sophisticated, negative piece-mold bronze casting technique.  Ancient Chinese bronzes are not only examples of artistic excellence crafted with the highest standards of production, but also they were integral to the moral, social and political structure of ancient China and thus represent important historical and cultural markers.

Richard A. Pegg, Ph.D. is Director and Curator of Asian Art, MacLean Collection.  This bronze vessel is included in the award-winning book “The MacLean Collection: Chinese Ritual Bronzes” written by this author and Zhang Lidong.