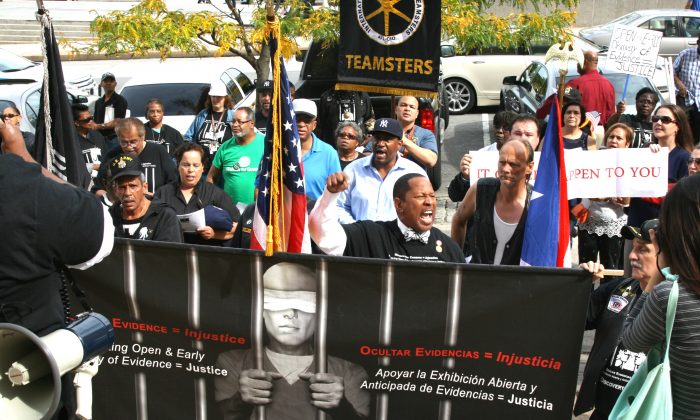 NEW YORK—Jeffrey Deskovic was jailed at age 17 for murder and rape. Only at age 32 did he emerge free, when the real culprit’s DNA in the police database proved Deskovic’s innocence.

Deskovic said that his attorneys could do little to help him, because the defense in New York courts can be left in the dark about the prosecution’s evidence up to trial day.

The prosecution doesn’t have to turn over any evidence to the defense unless they decide it’s crucial enough that it could merit the defendant’s acquittal at an impending trial.

As a result, people accused of a crime in New York will meet with lawyers who are just as out of the loop as they are on what the other side is planning. Only 13 other states have kept such a law.

“I was lucky to get out,” said Deskovic, who started a foundation to help others in situations like his. “My attorneys never knew ahead of time about the medical examiner whose fraud was key in convicting me.”

To fight wrongful convictions that could pervade under the ambiguity of current law, community leaders, clergy, veterans, and labor unions gathered for a rally in the Bronx where they screamed loud enough for people in the next block to hear them.

Toss out the current law, Criminal Procedure Law 240, they said, and replace it with 245.

Under 245, prosecutors automatically will turn over easy-to-obtain evidence, like electronically stored police reports, within 15 days of arraignment. And they’ll turn over evidence that takes longer to obtain, like transcripts, within 90 days.

Councilman Andy King, one of the main organizers of Monday’s rally, acknowledged that the Legal Aid Society, a nonprofit, first came up with the 245 idea five years ago, and said that the communities in the Bronx were furthering the same battle.

“As I understand, the Senate has had a problem with trying to pass this bill. Every good cause sometimes requires a fight,” King said.

He added, “Since ’09, they’ve been working and now we’re taking up the mantle, bringing it to life, we don’t want it to die.”

The Bronx and Brooklyn are two boroughs that often make the headlines for wrongful convictions.

Just last week, a Bronx man died of an asthma attack right before his trial to sue the city for $124 million over serving a 20-year jail sentence for a murder he didn’t commit. He had been released from prison 20 months earlier.

At the rally, Archbishop Angelo Rosario spoke of many years ago, when he was arrested for rape and almost sentenced to 15 years in prison.

“The only thing that saved me is that, that officer went to the church on 108th and talked to the pastor. Over a hundred people were there and I was preaching that night,” said Rosario, who breathed a sigh of relief at the close encounter.

Sergeant Manny Rodriguez, a police officer from Pennsylvania, made another unusual suspect.

Four police officers approached him when he was parked legally with an unmarked police vehicle and asked him to prove he was a real officer. When Rodriguez showed them his badge, ID, and arrest warrants, the four were not persuaded and claimed everything he was showing them was fake.

The case was dismissed but Rodriguez didn’t forget.