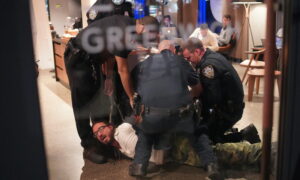 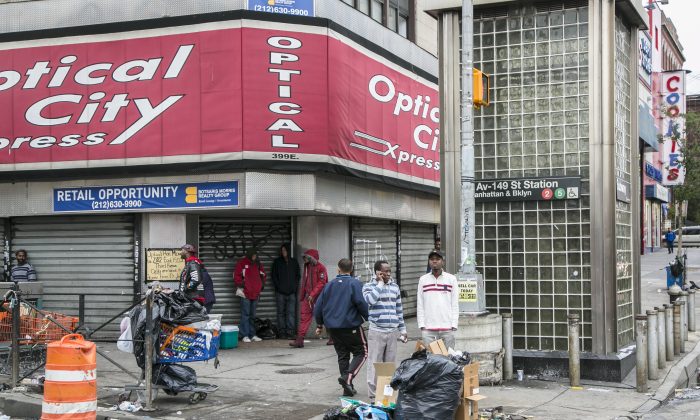 NEW YORK—The Bronx and Staten Island, as unalike as they may be, share at least two unenviable traits: Both at times call themselves “the forgotten borough” and both suffer the highest rates of opioid overdoses in the city.

While the well-publicized overdose epidemic on Staten Island is unabated, the Bronx has been hit even harder.

Last year, 937 people died in New York City of an unintentional drug overdose. About 80 percent of them overdosed on opioids, such as heroin, fentanyl, and/or analgesics like oxycodone and hydrocodone.

About 30 percent of those died from heroin and/or fentanyl in the Bronx, though just 17 percent of the city’s population live in the borough.

What’s worse, heroin overdose-related deaths soared more than 47 percent in the Bronx between 2014 and 2015.

Opioid abuse has spread among younger people and to northern parts of the Bronx that used to be less affected, according to Samantha Paz, assistant vice president of Boom!Health, a Bronx-based nonprofit that works with drug addicts.

The true extent of overdoses may be partially masked by the proliferation of naloxone, also known as Narcan—a drug that blocks the effects of opioids and can reverse an overdose.

Every month staff members of Boom! administer naloxone to reverse about three overdoses, and last year the clinic served over 9,000 addicts, Paz said. The facility has a syringe exchange program and offers services to addicts including counseling, treatment referrals, a place to lie down, and somewhere to wash up.

The overdose death rate was highest for whites in the Bronx, although the white population is just 10 percent.

The same problem exists nationwide. Paz had no definitive explanation, but suggested white people, at least in the Bronx, are perhaps just catching up on problems that have long plagued communities of color.

“Black and brown people have been dying [of drug overdoses] for years,” she said.

Researchers previously thought the most prominent cause of addiction was inborn predisposition. But recent research suggests the disease may have more to do with social factors, Paz said.

But other factors may play an especially strong role in the Bronx.

Between 60 and 70 percent of Boom!’s clients lack permanent housing. They may be homeless or staying on someone’s couch. That means they’re at greater risk if they overdose—there’s nobody around to help them, Paz said.

She doesn’t believe Bronxites use drugs more than other New Yorkers but thinks they use drugs in more hazardous circumstances.

The Bronx also saw the highest overdose death rate caused by fentanyl, a synthetic opioid that is hundreds of times more potent than heroin, according to the Centers for Disease Control and Prevention. Last year, forty overdose deaths in the Bronx and about 150 citywide involved fetanyl.

Fentanyl is usually used in combination with other drugs and it’s sometimes mixed with heroin, which leads to unintentional overdoses due to its high potency.

New York City has exerted considerable effort to counter the explosion of opioids over the past decade. But, disturbingly, the rate keeps rising.

Part of the difficulty is that opioid addiction starts quickly—often from legal sources—and often lasts a long time.

For many people, it can take years for the habit to degrade their ability to function in society. And that’s when many decide to change.

Steve Lesnikoski, for example, started taking prescribed Oxycodone after a high school sports injury. Later, he landed a lucrative IT job in California and while there, switched to using heroin.

It took nearly a decade and losing his job, family, and friends for him to decide to seek help.

“I had no other angles to shoot at, nobody else to hustle,” he said. “I was homeless.”

Most people, Paz said, are not prepared to quit.

If they get arrested and sent to prison or a mandatory treatment facility, some stay clean, but most relapse.

The city needs to get better at providing addiction treatment as soon as a person seeks it, said Hillary Kunins, assistant commissioner of the Department of Health and Mental Hygiene.

The city plans to revamp the 1-800-LIFENET help line to immediately connect callers with services, including addiction treatment and counseling.

Seizing the moment when people are willing to seek treatment is crucial, as it may pass quickly. And once a person has entered treatment, each relapse they experience is then part of the recovery process, Paz said. People who want to recover tend to return to treatment even if they relapse.

The city is planning an opioids abuse awareness campaign in the Bronx, similar to previous ones that have warned about the dangers of tobacco and synthetic marijuana.

A large chunk of work will focus on educating people so that they will decide not to abuse opioids to begin with, Kunins said.

“The best way to stay safe is not to start using,” she said at an Oct. 4 roundtable on opioid addiction organized by Bronx city council member Rafael Salamanca Jr.

But the added difficulty is that the addiction now often starts with prescribed painkillers. Many only switch to heroin after they’re hooked because it’s cheaper than buying pain pills off the street.

People may also need to change their approach to pain. “Even when people have pain, sometimes that medication is not really the safest choice,” Kunins said.

Another factor is the education gap existing in the younger generation, who didn’t experience the serious heroin epidemic of the 1960s and ’70s—heroin abuse was on the decline from the 1960s until the early 2000s.

“It’s perceived as safer than it is,” Kunins said. “They have forgotten about an older generation.”