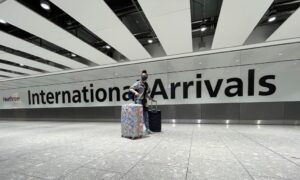 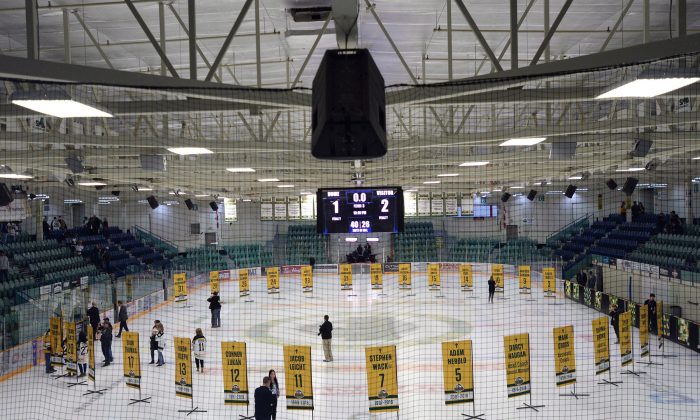 Sixteen banners in honour of the lives taken in the April bus crash are shown in the foreground and the banners for the survivors sit in the background during a tribute to the Humboldt Broncos in Humboldt, Sask., on Sept. 12, 2018. (Jonathan Hayward/The Canadian Press)
Canada

He was on the junior hockey team’s bus when it collided with a semi-trailer at a Saskatchewan intersection on the way to a playoff game. Sixteen people died.

He has mostly recovered—other than some nerve damage in his left hand and wrist—and he plans to play on Nov. 2, in his first game with the Broncos since the crash.

“I’m really excited, but at the end of the day I’m still pretty nervous,” Smith told The Canadian Press. “It’ll be OK after the first couple shifts but that first shift is going to be a lot of emotions. Even before the game it’s going to be pretty emotional.

The 6-foot-1, 185-pound forward from Leduc, Alta., said he had juggled the idea of playing for the team again as he recovered from his injuries.

“I just want to get back to it,” he said. “A couple of weeks before I came, I decided to get up and go.”

He started practising with this year’s team, which includes Brayden Camrud and Derek Patter. They were the only two players who were involved in the crash who are back on the Broncos roster this season.

Smith was in Humboldt to watch the team’s emotional Sept. 12 home opener but he said it was difficult to return as a player.

The toughest part was being back in the dressing room—which still has the inspirational words of his former coach on the wall—without so many of his teammates.

“We were a special and tight-knit team so getting into a new dressing room atmosphere was a different feeling,” he said. “It’s a good group of guys here and I’m excited for them. They’ve been awesome throughout already.”

Smith said having Camrud and Patter on the team was a huge help.

They helped ease him back into practice.

Smith said getting back on a bus was another step forward.

“It was very tough,” he said. “Obviously that brings back memories, flashbacks … pretty much everything.

“If I needed something, they were there. I just took some deep breaths and tried to get through it.”

Smith said he knows it will be a long road ahead.

“Mentally it’s more of a day-by-day process,” he said. “I take a step back when I need to, a lot of deep breaths.