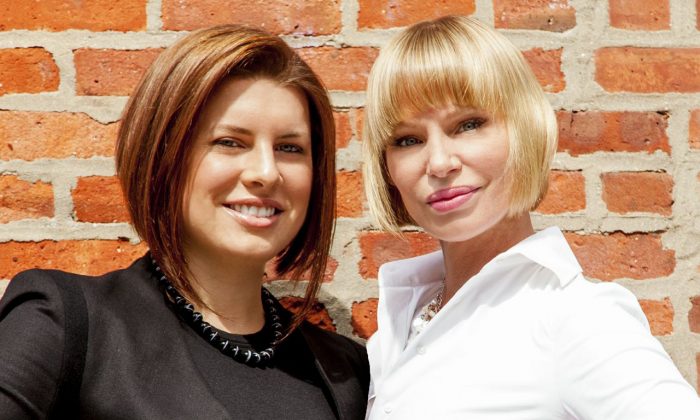 Stephanie O’Brien keeps rows of “Thank You” notes from her clients pinned neatly on a board above her desk. O’Brien and her partner, Jessica Peters, have stopped prospecting for new real estate business—almost all of their clients return year after year and keep providing referrals.

“Almost everything we do is off referrals,” said O’Brien.

Peters and O’Brien are both brokers and principals of the Peters/OBrien Team at Douglas Elliman. The team works from a Williamsburg office and specializes in Brooklyn new developments, condos, residential resales and investment properties.

O’Brien lives in Brooklyn, at the intersection of Myrtle and Broadway. She calls it the trifecta, a place where “Bushwick meets Bed-Stuy meets East Williamsburg.” She came to love Brooklyn for its privacy and convenience, among other things.

“There’s more sky everywhere,” said O’Brien, who moved to Brooklyn from the Lower East Side.

“It’s communal,” she added. “My nail salon buys me a cake on my birthday.”

O’Brien grew up between New York City and Austin, TX. She remembers swimming miles in the ocean on Coney Island with her grandmother, who was swimmer, and eating soft-serve ice cream and Nathan’s hot dogs.

Although O’Brien’s family is in real estate, she went the artistic route before joining the field. She attended the New School University to study film and went on to make humanitarian documentaries.

She found it hard to remain in the film industry without selling her integrity as an artist, so she moved to working on events.

“When I was working in events people would ask me to help them find a villa. The clientele that came to the events was very high quality,” said O’Brien.

She would help her clients find properties from Florida to Saint Tropez, but that work was just an added value.

“I realized if I was licensed I would get a commission,” said O’Brien. “So it happened organically. I went and got my license. I guess real estate is in my blood.”

O’Brien began real estate career in Manhattan in 2004. Her first sale came from one of her clients in the events field It was a two-bedroom apartment on East 11th Street between Ave. B and Ave. C that sold for $1.1 million.

O’Brien continued to work in Manhattan, but eventually began to convert some of her Manhattan clients to Brooklyn. She moved her sales entirely to Brooklyn in 2007.

Brooklyn has become very trendy since then, O’Brien said. GQ Magazine rated it “The Coolest City on the Planet” in 2007.

“I don’t even want to go to Manhattan anymore,” O’Brien said.

Peters and O’Brien said 7 out of 10 buyers they deal with are paying cash.

“Cash is more favorable because it is easier to close in this market,” said O’Brien. “But what’s happening is a lot of buyers, in order to be competitive, are making their offers non-contingent upon mortgage—basically saying that they are going to get a mortgage, but they are willing to close or lose their down payment if they do not.”

O’Brien said currently about half of her buyers are foreign, coming from countries like the United Kingdom, China, and Russia. Many of the purchases are investment properties and pied-à-terres.

Outside of her work in real estate, O’Brien is involved in activism and charity work. Most of her efforts revolve around children and poverty causes.

“I was born that way. I used to pick up wounded animals on the side of the road, bring them home, and try to save them,” said O’Brien. “On the school bus, whoever was being picked on or less fortunate, I would protect them. It started as long ago as I can remember.”