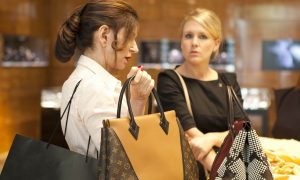 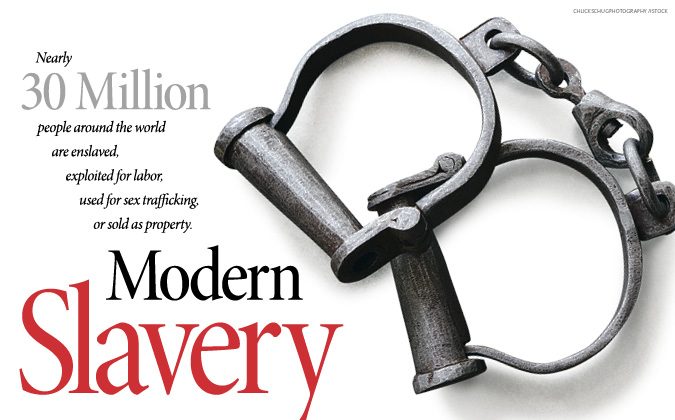 Modern Slavery: Broken Promises and a Life of Captivity

LONDON—It was the promise of a high-earning, stable job that lured the then 21-year-old Diana to come to Europe from her native Uganda.

The man that approached her about the opportunity had told her that she’d be able to earn enough money working in the service industry to support her two young children as well as her mother and sibling back home.

But once Diana (not her real name) set foot in the U.K., she was trapped in a nightmare. The man who had promised her a better future was a human trafficker, and young Diana was forced into prostitution behind locked doors and repeatedly raped.

Her captor instilled fear in her, saying the police would abuse her if she didn’t do what he wanted. Thinking of the police and violence back in Uganda, Diana didn’t dare to trust even the authorities.

“He kept threatening that they [the police] will report, they’ll cut you, they’ll beat you, they’ll jail you,” she said, struggling to explain her experience.

Before coming to the U.K., Diana thought Europe was a safe place. “I felt so bad because I thought maybe I would be free [in Europe],” she said.

Diana also feared for the safety of her family back home; her captor perpetually threatened to hurt her family so she would comply with his requests.

“I would do anything he wanted me to do,” she recalled.

Fortunately, Diana eventually managed to escape from her captors in July and was found by authorities sleeping on the street in Leeds in northern England. She was eventually referred to the Medaille Trust, a charity that helps victims who have been freed from trafficking.

Mike Emberson, project director at the Medaille Trust, has worked with victims of trafficking for over nine years. He said trafficking is a very lucrative business for criminals.

“It’s a piece of crime that keeps on giving. If you sell a kilo of heroine it’s gone—with trafficking, you can sell her every night,” Emberson said.

Criminals use different methods to lure women into the U.K. and force them to prostitution, Emberson explained. Women are often promised job posts such as chambermaids in London hotels, then deceived, or they are tricked by developing a romantic relationship with a man before being forced into prostitution.

Many victims first go through other European countries where the border controls are less strict, before coming to the U.K.

Since July 2011, The Salvation Army has been contracted by the Ministry of Justice to support adult victims of human trafficking in England and Wales.

A representative from the Salvation Army said that human trafficking is the third or fourth largest income worldwide for criminals. In the U.K., although there are a few cases where locals have been kidnapped, the traffickers most commonly target vulnerable individuals in their home countries.

A representative from the U.K.’s Association of Chief Police Officers (ACPO) said sexual exploitation is an ongoing issue across Europe.

“Unfortunately, there are many groups of men, women, and children who are susceptible to exploitation, especially the most vulnerable of our society,” the representative said.

Despite the high number of cases of human trafficking, there were only eight successful convictions for sexual exploitation under trafficking offences in the U.K. in 2011.

Emberson said the low number of convictions is partly due to the lack of a sufficient number of specialized units within the police force.

“Not many police officers can recognize a trafficker. There is only one dedicated anti-trafficking unit in the Met police” he said, “it is also to do with awareness, knowledge, and resourcing.”

The fact that there is not a unified piece of legislation that would address the issue also leads to the problem, an issue that Emberson said should be rectified with the newly announced modern slavery bill that the government intends to introduce.

The modern slavery bill, announced in August by Home Secretary Theresa May, would toughen the laws on human trafficking and create a modern slavery commissioner role.

According to the representative from the ACPO, trafficking prosecutions “appear low” because they are often recorded, in severe cases, as sentences for rape or “grievous bodily harm.”

The representative said raising awareness across law enforcement and prosecuting agencies, as well as the new modern slavery bill should increase prosecutions in the future.

A representative from the Home Office, which oversees immigration and crime policy, said that the U.K.’s newly formed National Crime Agency, which replaced the Serious Organized Crime Agency this month, will “lead an enhanced and coordinated response to targeting trafficking gangs.”

She added that the draft modern slavery bill will be brought forward during the current session of the British Parliament.