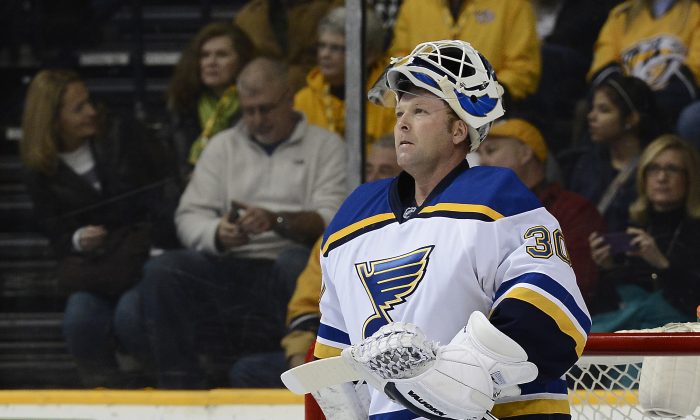 St. Louis Blues goalie Martin Brodeur (30) looks at the scoreboard during a timeout in the first period of an NHL hockey game against the Nashville Predators Thursday, Dec. 4, 2014, in Nashville, Tenn. (AP Photo/Mark Zaleski)
Hockey

Brodeur will officially announce his retirement from the NHL on Thursday at the Scottrade Center in St. Louis.

“It’s kind of sad to see a guy like him hang ’em up,” said Brian Elliott, the Blues’ All-Star goalie. “I’m sure it’s a tough decision, but I was grateful to be on the same team with him if only for a little bit.”

His final shutout came in his last win—a 3–0 victory on December 29 against Colorado. Brodeur was 3–3–0 in seven games with St. Louis.

He last played on Jan. 2 in a loss at Anaheim and he hadn’t returned to the team since being granted a one-week leave of absence on Jan. 14. Brodeur had dropped to third on the depth chart after Elliott returned from a knee injury, with 24-year-old Jake Allen sharing the position.

Brodeur, 42, played this final season (his 22nd in the league) with St. Louis after spending the first 21 years in New Jersey where he won four Vezina trophies and three Stanley Cup titles. Brodeur retires as the league’s all-time winningest goalie with 691 victories. He’s also first in shutouts with 125.

“Marty is a very loyal guy in both ways,” Lamoriello said to NJ Advance Media. “They gave him an opportunity (to play). There are a lot of things going through his mind right now. He’ll be back with the Devils.”

Brodeur did not re-sign with New Jersey after the Devils committed to to Cory Schneider as the No. 1 goalie.

The longtime goaltender grew along with the Devils organization. The 20th overall pick in the 1990 NHL Draft, Brodeur was in the NHL by the next season (1991-92) and by the 1992-93 season he was awarded the Calder Trophy—the NHL’s version of the Rookie of the Year. By 1995, New Jersey won their fist Stanley Cup and Brodeur led the way.

After winning the Cup again in 2000 and 2003, the Devils fell out of contention a bit, missing the playoffs three of the last four seasons as an aging Brodeur saw his numbers slowly decline.

The 10-time All-Star Brodeur will not be eligible for the Hall of Fame until three years after retirement, though he will certainly get in on his first try.