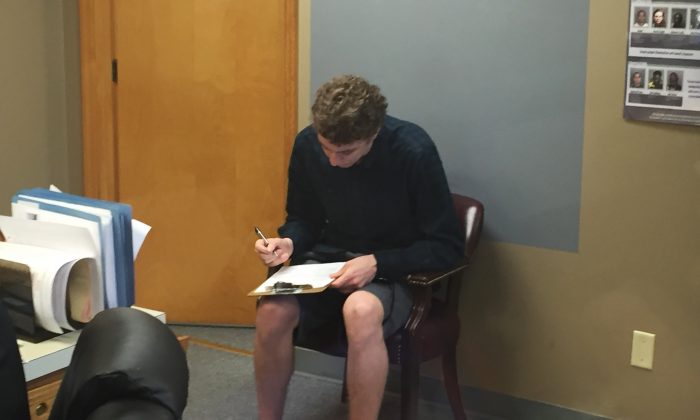 COLUMBUS, Ohio—A former Stanford University swimmer whose six-month jail sentence for sexually assaulting an unconscious woman sparked a national outcry has registered as a sex offender in Ohio, where he is living with his parents.

Brock Turner, 23, registered at the Greene County sheriff’s office four days after he was released from a California jail on Sept. 2 for good behavior after serving half his term. As a Tier III sex offender, the harshest of three levels in Ohio, Turner must register as a sex offender for life, checking in every three months.

A look at Ohio’s sex offender law and online database:

Ohio’s sex offender registry started in 1997 in response to public outcry nationally over high-profile child sex abuse cases, including the 1989 abduction of 11-year-old Jacob Wetterling from a rural Minnesota road by a masked gunman as he rode bikes with his brother and a friend near his home. The 1994 federal Jacob Wetterling Act required states to create a system of sex offender registration. Ohio’s database was originally for law enforcement only. It became accessible to the public in 2004. Last year, the Ohio Supreme Court said the state’s registry requirements were constitutional and didn’t amount to cruel and unusual punishment.

How the Database Works

Ohio’s online database currently has about 17,500 offenders, with photos included, listed in a database searchable by name, addresses, offenders’ emails and phone numbers, and whether offenders have violated registration rules. Offenders must register within five days of entering a new county or when changing their address. They must provide fingerprints, DNA, social security numbers and contact information. The Ohio Attorney General’s Office maintains the database, but information is entered by local sheriffs, who handle registration and notification. Email alerts can be set up for notification when offenders move into specified areas. Violations for failing to register or update information depend on the seriousness of the original crime.

Ohio currently has a three-level registration system. Tier I offenders, convicted of crimes like sexual contact with minors, voyeurism or promoting prostitution, must register annually for 15 years. Tier II offenders, convicted of crimes like kidnapping with sexual motivation or use of a minor in nudity-oriented material like photos, must register every six months for 25 years. The most serious level, Tier III, for crimes such as rape, sexual battery and murder with a sexual motivation, requires lifetime registration every three months.

Results are mixed on whether the registries reduce the rates at which sex offenders commit new crimes. A 2000 study found no significant difference in the rates between individuals in the databases and individuals before they were entered into a database. Last month, federal appeals court judge Alice Batchelder said there is “scant” evidence that Michigan’s sex offender registry law accomplishes goals such as reducing recidivism. A 2005 study, however, found a nearly 70 percent reduction in the so-called recidivism rate of offenders forced to register and be subject to notification requirements.