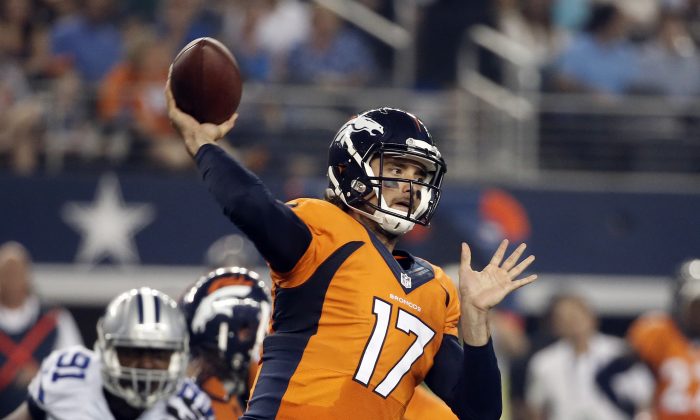 Brock Osweiler, the six-foot-eight backup Denver Broncos quarterback, was inserted into the game against the Kansas City Chiefs.

Peyton Manning was apparently benched in favor of Osweiler.

Manning has reportedly been dealing with foot and rib injuries. Manning didn’t practice this week due to lingering injuries.

Osweiler, 24, was drafted in 2012 in the second round. He threw his first career touchdown against the Oakland Raiders in December 2014. The Idaho native played college football at Arizona State University.

This season, Manning has played poorly by his standards. The 39-year-old quarterback leads the entire NFL in interceptions.

Who the hell is Brock Osweiler?

Damn @BrockOsweiler is in the game now! Reppin for Montana out there! #Broncos

After two snaps, Brock Osweiler’s already had a better game than Peyton.

And has the Brock Osweiler era started? Maybe.

When Peyton Manning has a 0.0 passer rating and gets benched for Brock Osweiler @MopeySeeker43 pic.twitter.com/ByNVTR3AbM

Damn Peyton 5 for 20?? And who tf is Brock Osweiler lol