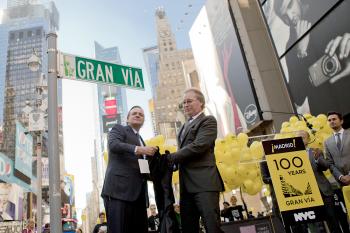 Broadway Designated ‘Gran Via’ for a Day

The anniversary commemorating the beginning of construction of the Spanish capital’s famed avenue, widely known in Europe as the “Spanish Broadway,” was also the occasion for celebrating another year of partnership and friendship between the two cities.

The timing couldn’t have been better, noted Madrid Deputy Mayor Miguel Ángel Villanueva, as the United States has just celebrated Columbus Day , which is also a national holiday in Spain.

Madrid and New York have been working in close collaboration since 2007 to promote tourism in the Big Apple and in the Spanish metropolis. Both are major international destinations and have much in common, from their many nightlife possibilities to their shared passion for theater.

The deputy mayors from both cities joined NYC & Company CEO George Fertitta and CEO of Promoción Madrid Pablo Bautista for an international press conference at the public space on Broadway and 46th street, which was recently renovated into a pedestrian mall by the Department of Transportation.

At the event, they signed the media and marketing exchange agreement designed to boost travel between the two cities in 2011.

“It’s vital that we collaborate with other destination locations like Madrid, as our economies depend on visitors,” said Steel. “The travel and tourism industry remains New York’s fifth-largest industry, supporting more than 300,000 jobs from the nearly $30 billion raised in direct visitor spending across the city’s five boroughs.”

New York City is the number one destination for travelers from Spain, with more than 305,000 visitors accounting for 60 percent of all travel from Spain to the United States in 2009. Americans also represented a large share of tourists visiting Spain in 2009, with 405,000 U.S. travelers amounting to 27 percent of the total number.

“We are important destination locations for one another, as we share comparable interests, energies, and passions in life,” said George Fertitta.

A street sign inscribed “Gran Via” was unveiled after the signing ceremony, and Broadway was symbolically renamed after the Madrid avenue for a day. The event concluded with the world premiere of Madrid’s newest promotional video on Times Square’s Toshiba Vision giant screen and the release of yellow balloons into the Midtown sky.