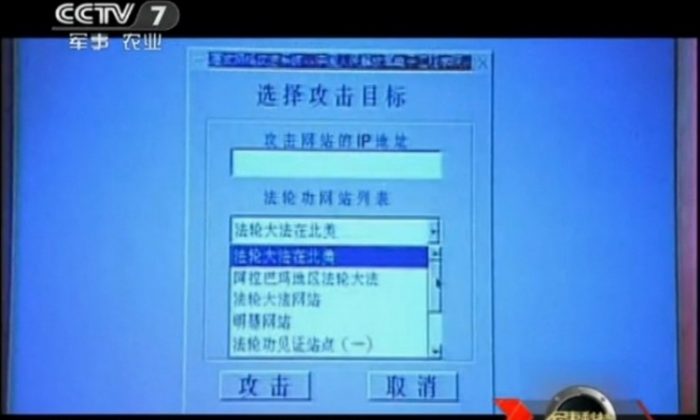 A screenshot of the hacking software shown during the Chinese military program on July 2011. The documentary was rebroadcast recently, amidst renewed attention to Chinese hacking against the United States. (The Epoch Times)
China

Phoenix Television, a Hong Kong-based broadcaster that enjoys a friendly relationship with Beijing, recently rebroadcast a documentary produced by the Chinese state mouthpiece CCTV, which shows a Chinese military computer launching a computer network attack on a server located in the United States.

The documentary, titled “The cyber storm is here,” was first broadcast in July of 2011, and was later reported by The Epoch Times. Part of the feature shows a computer operator choosing a list of servers to launch an attack on. A number of them have names like “Minghui Net” and “Falun Dafa in North America,” both of which are associated with the Falun Gong spiritual practice, which is persecuted in China but practiced freely in the United States.

In mid-2011 after the news broke, it was widely reported in the international media, and CCTV eventually removed the video from its website (though the section in question remains on YouTube).

It was this documentary, including the scene showing an attack, that Phoenix rebroadcast, itself rebroadcasting a repackaged version of the documentary that was shown on Hubei Television, on March 1. That was just over a week after Mandiant, a U.S. cyber security firm, released a report documenting hacking carried out by People’s Liberation Army Unit 61398. It is unclear whether Phoenix and Hubei Television deliberately rebroadcast the documentary following those revelations, or whether it was simply out of ignorance.